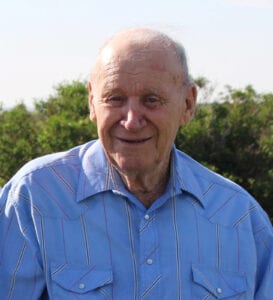 Funeral services for August Raile, 86, of Ridgeview was at 1 PM, CT, Wednesday, July 29, 2020, at Kesling Funeral Home of Mobridge. Burial was at 4 PM, CT, at Dupree Cemetery under the direction of Kesling Funeral Home. Visitation began at 11 AM. August passed away Saturday, July 25, 2020 at Avera Oahe Manor in Gettysburg.

August Raile was born to Fred and Eva (Krein) Raile at Wishek, ND, on May 23, 1934. August grew up in Ridgeview where he spent his life. He was a year old when his parents moved to the Raile farm in the country. He was only seventeen years old when he started managing the farm with the help of his sisters, Helen and Carrie.

In 1960 he was united in marriage to Sharon Diermier in Dupree, SD. To this union they were blessed with four children, John, Mary, Andrew and Danny. On September, 23, August and Sharon would have celebrated 60 years of marriage.

He loved working with wood. He built several buildings from the ground up and did a lot of repair work for many of the neighbors. He also built a lot of cupboards for his home and remodeled the interior.

August spent his life raising cattle and farming until he retired. Butchering and making sausage, head cheese and liver sausage were an annual event. He also helped the neighbors with their brandings.

August had a brief battle with cancer that he fought and won. His battle with Alzheimer’s was lost.