At the heart of it… The spirit of place slips around ones heart, and never lets go 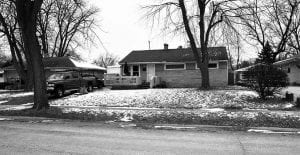 In Indiana, there is a festival called Spirit & Place.

For the longest time, I did not fully understand the attachment people have to place.

This may be rooted in my strong desire for independence, and a habit of always looking beyond my current circumstances into the next best thing or place to be.

Since I left my childhood home, I have been in pursuit of a life somewhere else — a place and job that in some way holds me still.

From the time I toddled around in diapers until I graduate high school in 1989, I lived in Lawrence, IN at 7710 E. 49th Street, just past Normal.

My mother continued to live at that home until 2007 or 2008, when she finally moved off of 49th Street, having lived there since her sophomore year of high school.

When I left for college, I was happy to go, and was not keen to come back home any time soon. I spent most of my weekends at school in Bloomington, IN, and did not try to come home very often. 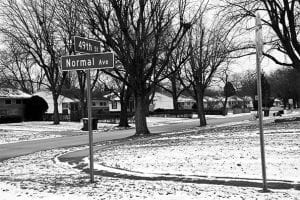 The East end of 49th Street at the corner of Normal Ave. The high school bus I rarely rode stopped at this corner. Photo by Jody Rust

Still, I expected my mom to keep my room in tact for me, but my mom had other plans, and used the space for an office instead.

The transformation of my room had a profound effect on me.

It cut the chord connecting me to a childhood that I loved and yet was happy to leave behind.

I came back to my childhood home repeatedly after 1989, and watched as my mother transformed its interior and exterior in an effort to make the small, three-bedroom, full-basement home closer to her dream home.

Eventually, my mother decided she just could not do anymore to 7710, and so, she searched for and found a home more aligned with her dreams.

Since she sold the home, I had not returned until this past holiday.

She and I drove over to the house in a little rental car, and as I turned left onto 49th street from Franklin Rd., memories flooded in and spilled out the rims of my eyes.

At the “T” of 49th and Franklin, Dairy Queen still sits. My brother and I used to scrounge for change in the dryer and my mom’s coat pockets for money to either go to DQ, pay the ice cream man when we heard his music down the block, or buy candy bars from Ben Franklin, which became Hooks, then People’s and then CVS.

The streets were quiet on this early Friday afternoon, and all the street signs looked larger, bolder, newer and blue. They used to be smaller and a dingy green.

The house, minus the split rail fence, the oak tree by the driveway, and the blue spruce in the center of the yard, looks pretty much the same as it did when my mom sold it.

When I walked up to the porch to ask the current residents if it was OK if I took photos, they were kind enough to say yes, but looked at me as if I was a little off.

When I turned to come off the porch, I could no longer hold my composure. My lip quivered and my breath staggered out of me and whirled onto the driveway, chasing a memory of me on a sunny Easter morning, wearing a dress my grandmother made for me.

I sang and twirled in that dress until I heard a car coming, and raced back to the porch, face flushed, as if I would be snatched into oblivion if I did not make it to the porch before the car passed.

I could see my brother and I playing freeze tag in the yard, and then when that became a bore, we got out the kickball and used the trees as bases.

The streets were flatter than I remembered, and as I watched my feet touch the blacktop, I remembered an argument my mother and I had after I got home from soccer practice.

I was so angry, I ran three miles in my socks. I can still recall the feel of the hard surface of the road as I pushed it behind me, running from the hurt I felt and hoping to leave it somewhere on the road.

What I did not know then, was that while we were not financially well-off, and I was a disconcerted teen with big dreams that this small Indiana town could not contain, we lived in an oasis that was perfect in its imperfections.

The street on which I grew up is beautiful. The trees that line the walks create a green canopy in the summer, and a red, gold and brown kaleidoscope in the fall.

The alleyways where we played hide and seek, spied on one another and created forts fueled the imaginations of all of the kids who grew up with me.

As we grew older, we ventured further and further from home, going to the little park, the big park, Ft. Benjamin Harrison, the high school, Castleton Square Mall and by the time we were seniors, we were cruising the Circle downtown Indianapolis.

For awhile, I imagined I would go back to Lawrence and live with my family. I would teach at my old high school and write for the Lawrence Topics.

I tried that track, but it was not meant for me.

Instead, I have traveled even further from my childhood home, and in directions I could never have imagined in my youth.

I am blessed to have grown up in Lawrence, attended Lawrence schools, lived on 49th street in a modest home with its then damp basement, clothes lines in the backyard, and neighbors always ready to tell my mom when my brother and I were misbehaving.

I am not likely to move back to Indiana, or live in Lawrence again, but this last visit has made me aware of how the details and memory of a place create a spirit that wraps around a person’s heart and shapes ones life in ways often unnoticed and sometimes inexplicable.

The other night, I stepped out of my car, dusk darkening the horizon and the street lamp glistening the snow.

Drifting over the stillness, I heard a man singing a prayer song. I imagined the fire burning as people sat in the inipi, and I stood outside my apartment.

I stood and listened for a minute, and then followed the crunch of the snow under my boots into my apartment.

I knew, as the door silenced the song, that like Lawrence, Eagle Butte has wrapped itself around my heart.