At the Heart of It: Eulogy for a friend: Peg Henson, a servant of the people 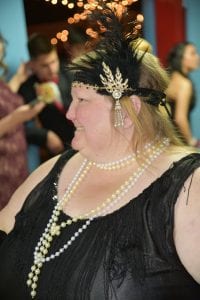 Holding onto the moment is like grasping water. Water is tangible, but it slips through your hands and is gone. We have the memory of its smooth and cool brush across skin, but even that memory fades with time.

When we experience it again, or try to repeat it, it is familiar, but it is never exactly the same; still, the new experience connects with the old and is catalogued in our brains to be recalled when we either live or long for the moment again.

Moments of a lifetime pile up fast and their presence shows up in the creases at the edges of our eyes and the corners of our mouths. They create pathways across time, letting us know that they happened, even if we can no longer see, hear or feel them.

This past weekend, while attending Marcella LeBeau’s 100 years full of moments, I learned that our school and community lost the moments of one of Cheyenne-Eagle Butte High School’s teachers, Family and Consumer Science (FACS) Teacher Peg Henson.

Ms. Henson filled every moment of her life, or at least the parts I knew of it, with a fiery passion to serve others.

She is a servant of the people. Even now, she will serve her students and people who knew her in the stories they tell about her, and the best way to honor her life and keep the legacy of her service alive will be to tell her stories and teach her lessons to others.

Ms. Henson was a short blonde with a testy temper and an infectious kindness. She established very clear and snappy boundaries, and her irritation could fill a room with tension, but her smile and joyous greetings could chase the clouds away on a rainy day.

So often people talk up someone after they have gone, and Peg and I had many conversations about how we should honor people while they are alive, or at least consistently let them know how much they mean to you or others.

One time, she and I talked about relationships with colleagues and friends. She said she learned from some book or seminar that people have to choose if they want to sustain a relationship with someone or not. If the relationship is needed, the friendship considered worth, then a person will put the effort and time in it to bridge misunderstandings and forgive wrongs.

When we would get into the heat of a discussion, which could stretch long after the few minutes of an intended visit, I had a tendency to make “you statements.”

Never have I met a person more adamant that “you” statements should not be used when talking about people in general nor in talking about a problem with someone. Ms. Henson would correct anyone using “you” statements — colleagues, parents or students — and while that could be annoying, I always respected her strength of conviction.

As the FACS teacher, Ms. Henson provided culinary delights through her students and for her students in her cooking classes, through special dinners and whenever anyone was hungry.

While to some she seemed a chaotic mess, she was also the model of organized chaos, providing a learning environment that was both challenging and safe.

“Above and beyond” was Peg’s normal. She could not say no, even though she would berate herself sometimes for taking on too much — a habit that many of her friends and colleagues share.

She hosted the Tuesday Talking Circles where students, staff and even some parents and community members would share their thoughts on a wide range of topics.

She led the Natural Helpers group of students and staff in an effort to help people involved help others with personal, social and academic struggles that interfere with one’s well-being.

Ms. Henson could almost always be seen helping her friend and colleague, English Teacher Monica Eisenbraun, with prom or after prom, lock-ins, pumpkin carving, homecoming activities, concessions or just about anything else that needed an extra hand.

Not only did she actively lead or assist with student-centered activities, she also took staff meeting notes, created Google documents for administration and staff to keep track of parent contacts or students’ eligibility lists, or made herself available to help figure out how to operate a desktop recording program or work through a glitch in SDMyLife, or write and ensure compliance with the state Perkins Grant, or participate in academic planning sessions — and all the other tasks she completed to serve the needs of C-EB High School, its students and its staff.

As if she did not have enough to do, Peg Henson also volunteered and worked in Pierre at a women’s shelter.

All of this is what I knew she did, but when I talk to others who knew her, I understand she did more than what is listed here.

She was an ear to vent, a shoulder to cry on, a computer nerd to rely on, and a voice that would not be silenced.

I know that many others will share their memories of moments with Peg Henson. They will share what I don’t know, what I have not shared — information meant as an official record of a life lived in each moment.

From my perspective, Peg was honest, walking the line between brashness and tactfulness. She pissed me off and made me smile.

She started at C-EB the same year I did, the year the stop lights were installed on Highway 212, and slowly became a confidant, mentor and friend.

What I offer here is a heart-felt tribute to a woman whose impact will be missed as much as it lives on in the people whose lives she sparked with the electricity of her smile, lifted with the bubbles in her laugh and inspired with her depth of knowledge and breadth of her resourcefulness.

Godspeed, Ms. Henson, on your journey to the spirit world. You are loved and we will miss you dearly.