At the heart of it… Embers of change fuel the need to walk for awareness, and gather around the fire 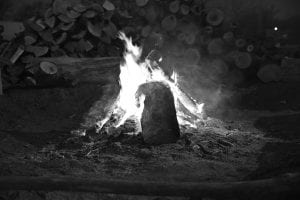 Walk after walk down Main Street to raise awareness of a problem we all know exists, I thought a waste of time, until someone reached out to me for help with addiction, and I started contacting people to find out how to help.

Without the marches down Main, without the awareness presentations and trainings at the high school, I would not know who to go to when someone came to me and asked for support.

I knew about Mama’s Against Meth, Justice for East Lee, and the Four Bands Behavioral Health program. I had at my fingertips the names of five people I could contact for advice about what to do, who to talk to, and how to talk to people about helping someone struggling against addiction.

I have learned again and again that true change and growth and greater depth of awareness and understanding is often slow to come.

Major events that happen tend to jar people out of their individual worlds, but they are easily left in the past and often forgotten. Time deadens the impact.

Even with events such as 9/11 – our country was impacted, but the lasting emptiness of the event sticks more strongly with those who are continuously reminded of the loss, rather than those, like myself, only saw it on TV.

Like a child that keeps poking you in the side, the walks for justice and awareness in Eagle Butte can seem more of an annoyance to some – an act that is not making a difference. But like that child, who does not stop, one cannot help but give those walks attention.

Without the continued prod, the cry that the pain and suffering caused by murder and meth is not going to go away, too many people would retreat into their own lives, safe from the pain. They would wrap themselves in their own worlds and forget that the world outside is forever crumbling for too many people in the community.

We need the constant reminder that things are not right in Eagle Butte, and that there are people who are willing to help make things right.

The Sacred Fire burns day and night. People who ignored it initially, are starting to talk about it as the first month of 2018 wanes.

The Scared Fire burns, and its embers are the hearts of every person who burn to bring the community together in peace, and help each other navigate the spectrum of human behaviors that tend to divide us from one another.

Whatever strength the Fire has, whether it is truly a spiritual fire or its power a construct of the people who believe in it, it represents raising awareness, talking to anyone and everyone respectfully, supporting one another through struggles; it represents unity between all relations.

I was wrong to question the power of the Marches, and anyone who questions the power of the fire is also wrong – because while these actions may seem minimal, they are essential in letting people know that help is out there.