On August 2, 148 riders made a stop in Eagle Butte to attend both opening ceremonies of the new Cheyenne River Sioux Tribe Veterans Park and the Ledger Art Exhibit at the Lakota Cultural Center.

The next day, the riders continued their route to the community of Bridger, where they met with community members who shared stories about Chief Spotted Elk, who is also known as Big Foot.

Escorted by CRST Veteran Service Officer Robert Dunsmore, the riders then made their way to the Wounded Knee Massacre site.

Once at the massacre site, the riders conducted prayers at the mass grave. 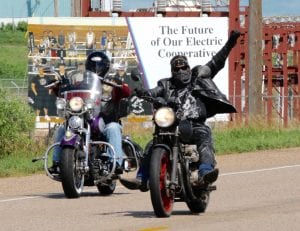 EAGLE PHOTO BY Darrel Eagle Staff A rider throws his fist into the air upon arriving in Eagle Butte on August 2. 148 riders joined in the Annual Wounded Knee Memorial Motorcycle Run, which started on the Standing Rock Sioux Reservation, through CRST, and ended at the Wounded Knee Massacre Site. 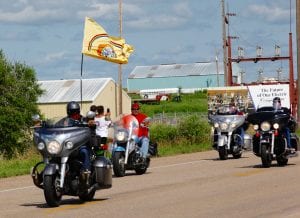 EAGLE PHOTO BY Darrel Eagle Staff Riders from across the nation joined in the annual memorial ride. The flag of the Navajo Nation was flown by this motorcyclist who made the 1,000+ mile journey to participate in the ride. 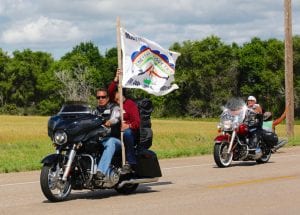