According to Cheyenne River Sioux Tribe Veteran Service Officer Robert Dunsmore, 114 registered riders came from across the nation to participate in the annual ride.

Various tribal nations were present as riders from the Oneida, Potawatomi, Ho-Chunk, and Navajo Nations flew their tribal flags during the ride, a testament of the historical and cultural importance of the event.

The memorial ride started from Prairie Knights Casino near Fort Yates, ND, where an opening prayer service was conducted.  The group then rode to the Sitting Bull burial site in Fort Yates where they paid respects to Tatanka Iyotanka, who was murdered on December 15, 1890, on the premise that the Ghost Dance would cause an uprising.

The riders then proceeded to the Sitting Bull Monument in Mobridge.

After having lunch at the Grand River Casino, the bike riders rode to Eagle Butte where they drove in a mass parade downtown. Main street was abuzz with spectators lining the street to get a glimpse of the impressive group. Business owners stepped out and waved as the riders drove by, and children happily gathered the candy that some riders tossed out to them.

The group stayed the night in Eagle Butte and some attended inipi and prayer ceremonies throughout the community.

The next day on August 4, the riders rode through Faith and stopped in Bridger for a program and traditional feed.

Bridger is historically significant because it is the traditional territory of Hehaka Gleska, and it was from this area that Lakota families followed Hehaka Gleska to Red Cloud’s agency after hearing about the death of Tatanka Iyotanka. They were hoping to seek shelter from the U.S. Army.

“We tried to stay as close to the original route that the ancestors did when they were fleeing,” Dunsmore said.

After the visit in Bridger, riders rode through Phillip on to Kyle by way of Cedar Pass before arriving at the Wounded Knee burial site. A prayer and remembrance ceremony was held for those who were killed on December 29, 1890. It is estimated that over 300 people are buried in the mass grave at Wounded Knee.

“The mission of the Wounded Knee Memorial Run is to preserve the memory of the innocent Lakota people who suffered and died on December 29, 1890,” states an event flyer. 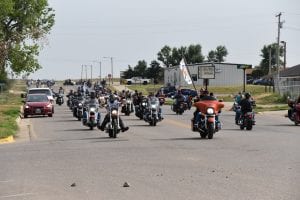 An annual memorial horseback ride also takes place every December, and ends in Takini- the community of Wounded Knee survivors.