American Legion veterans from across the state converged at the Old Agency Building for the annual District 1 Fall Meeting on Sunday, September 29 for Legion business and the celebration of the centennial of the Legion and the American Legion Auxiliary (ALA).

The Auxiliary is an extension of the American Legion and is the world’s largest volunteer patriotic service organization, comprised of military spouses who volunteer their time and service to help with Legion activities.

Sunday’s gathering, which was hosted by American Legion Post 308 of Eagle Butte, kicked off with social hour at 10 a.m. as Legion members from Ziebach, Dewey, Corson, Harding, Lawrence, Perkins and Meade counties arrived.

Lunch was served around noon with a meal of sloppy joes, cookies and various salads. Post 191 ALA President Nancy Dupris, a constant force who is ever present at veterans’ activities, helped organize the Auxiliary meeting and the celebration of the ALA’s 100th birthday. Cupcakes decorated in red, white and blue were shared after the group sang “Happy Birthday”.

After lunch, American Legion State Commander Fred Nelson and District 1 Commander Dave Booze presented WWII veteran First Lieutenant Marcella LeBeau (Oohenumpa) with a bouquet of flowers and a Certificate of Recognition for her 31 years of service as the Director of Nursing at the Cheyenne River Indian Health Hospital in Eagle Butte. The certificate also commended LeBeau’s efforts to preserve American history, Lakota culture and her mentorship to Native American women as founding member of the North American Native Women’s Association. LeBeau has been a member of the Legion for 47 years.

To end the meeting, both commanders Nelson and Booze were presented with star quilts in recognition of their leadership and in gratitude for their attendance. American Legion Post 308 Commander Kermit Dupris said the gathering was a good turnout and a success. 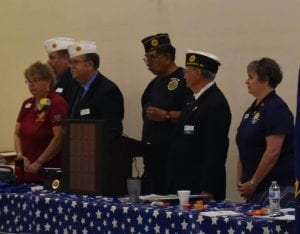 American Legion Post 308 Commander Kermit Dupris gives the welcome address at District 1 Fall Meeting which took place at the Old Agency Building in Eagle Butte this past Sunday. Legion representatives from across the state met for the annual meeting, which Dupris called a success. EAGLE PHOTO BY THURMAN ADAKAI

WWII veteran Marcella LeBeau is presented with flowers and a Certificate of Recognition. PHOTO BY NANCY DUPRIS