“All things will be well” says Mother Margaret

Local Episcopal Priest released from her position after eight years 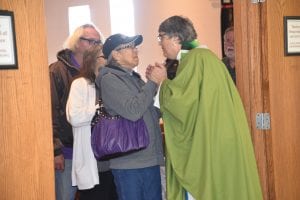 EAGLE PHOTO BY JODY RUST At the St. John’s Episcopal Church in Eagle Butte, Mother Margaret Watson greets and says goodbye, or “God be with you” to the congregation she served for eight years. Mother Margaret was released from her position as supervisor for the Cheyenne River Mission of the South Dakota Episcopal Church for allowing certain Lakota traditions to take place in the church, according to parishioners and community members who spoke at the service on Sunday.

Once upon a time, I was told years ago when I arrived on the Cheyenne River Reservation, that the traditional Lakota meetings did not start until everyone arrived. Most attendees made sure they arrived “on time” so that they would not keep the other people waiting.

In the mainstream world of American society, time requires punctuality. Once times are set, people bend to them. The old adages “time waits for no one” and “the show must go on” come to mind.

Services at the local St. John’s Evangelical Episcopal Church on Main Street in Eagle Butte were supposed to start at 10:00 a.m., but upon arrival, I discovered they were changed to 11:00 a.m.

In the lobby of the church, several other early arrivals sat drinking coffee and talking quietly.

My friend Tyson White said he and his wife would be in town for the services and a wopila at St. John’s and invited me to attend with them.

At one time in my life, I would have asked a million questions about the services and the wopila, but now, I usually think, someone is being honored and appreciated and accept that the occasion must have worth.

Reverend Mother Margaret Watson, the Supervisor for the Cheyenne River Mission bustled about the church, asking helpers to set up additional tables and preparing for the day’s service.

When the service started, there were approximately 100 people or more filling the pews. A table was set up in the corner of the chapel covered with star quilts and other items.

The message was about the word of God and the church. The church, said Mother Margaret, is in your hearts and not in a building, and from the hearts of man, who was made in the image of God, come the words of Christ. She encouraged the people to carry that word with them, give it to others and to God and Christ in prayer no matter what language you speak or what location you may find yourself.

She talked about not wanting to leave, but explained she would be in Rapid City, and while she would not be on Cheyenne River preaching and presiding over the eleven churches that make up the Episcopal Mission, she would be back to visit, and she would carry her congregation in her heart and prayers.

After the sermon, members of the congregation were given an opportunity to speak. Doris White, my friend Tyson’s mom, took to the microphone first, thanking Mother Margaret for her service, recognizing the number of funerals Mother Margaret helped to facilitate, approximately 400 in her eight years on Cheyenne River, Mother Margaret said later.

“Evilness is coming to our church,” said Carla Blue Coat.

“God brought Mother to us to do God’s work; We’re all broken-hearted. . .We’re all going to miss you. You brought so much to our reservation,” Blue Coat said.

By the time the third and fourth people came to the microphone, a different picture of Mother Margaret’s departure began to emerge, but I was still not clear about why she was leaving.

When I found out this was her last service at St. John’s, I thought she had been reassigned to another church, but she explained later that priests are elected to serve the people of a congregation, so in a sense they apply for the position and they are accepted or rejected.

Mother Margaret and Father Joel Watson came to Cheyenne River eight years ago to serve the Lakota people. She said all of the people, regardless of denomination or preference are in her purview as a servant of God and his people — which is everyone.

Mother Margaret shared with her congregation some fond memories — mostly jokes played on her or innocent comments from little ones trying to make sense of her role as “Mother.”

One time, Wakiyan Peta asked her to help them sing a song, and Mother Margaret said she caught on by the fourth round, and then when the song was done, she was told she helped them sing the AIM song.

The congregation, which had been moved to tears by comments from several parishioners who expressed their sadness about her departure from the church, chuckled at the joke played on the good-natured priest.

“Mother Margaret was fulfilling our wishes here on the Cheyenne River — she was allowing our people to pray in their own culture,” said Harold Tiger.

“When I heard the news of her getting fired,” said Dana Dupris, “I said, ‘Good, I’ll start campaigning and we’ll elect her the next Chairman’.” Again, the people laughed through their tears.

Annie Walker of Promise said Mother Margaret came, and did the Lakota way in such a way that “you would never know she was an outsider.”

Deacon Ina Traversie said Mother brought fun back into the church, rather than being a place where people only meet when a funeral is held.

Self-proclaimed grass roots traditionalist Richard “Baba” Smith from Whitehorse, sang a prayer song for Mother Margaret and then as people exited the service, he and another singer, Tyrone, sang an honor song.

Before singing, he said he may be told to leave the church, but he planned to sing anyway.

Bob Chasing Hawk spoke as well and encouraged the congregation to write to the Bishop to support Mother Margaret.

Mother Margaret ate a meal with the people she has served for the past eight years, and then she held a wopila in which she gifted people in the congregation in thanks for their service to her and her husband in the time she has been on Cheyenne River, a place she and Joel consider home.

Joel said they asked themselves, when they learned that Mother would be released from her position, “What will we do now?”

Mother Margaret did not comment specifically on the reason for her release from the church, but she did say she was well-used as a priest, and that she felt she served her community in a manner befitting Christ’s mission — with open arms, welcoming other traditions, like the Lakota, who have no separation of church and state in their lives, and for them to be whole, they need their traditions in the church.

According to the people who spoke to her, of her, and on her behalf on Sunday, Mother Margaret gave herself and her love and service to the people of Cheyenne River as they needed her, in the way they have needed her since she first arrived and many hope that after this trial, she can return and do more of the same. 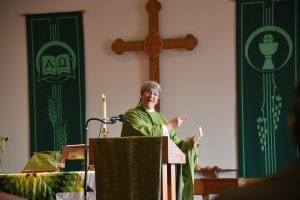 EAGLE PHOTO BY JODY RUST Animated in her story-telling, Mother Margaret Watson shares a memorable moment from her experiences at St. John’s Episcopal Church. In one story, a younger child heard many of the women calling her Mother and asked if she was really all of those women’s mother. The congregation chuckled and many shed tears as they said goodbye to their beloved priest.