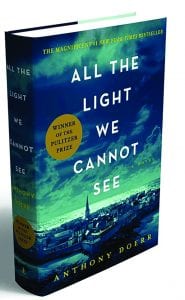 In the Chicago airport this past summer while in route to the Dominican Republic (DR), I realized that most large airports have numerous book/newspaper retail outlets, and the book and magazine displays are beacons that lure me to peruse the stacks and racks.

On one table, I found the novel All the Light We Cannot See, by Anthony Doerr, and on my return from the DR, after having read A Dog’s Purpose, I began reading Doerr’s novel.

Work and more work filled my time, and it was not until this holiday break that I was able to finish the 530- page work of historical fiction.

Published in 2014, and according to the author in a video posted on anthonydoerr.com, 10 years in the making, the novel earned numerous well-deserved awards:

•  Winner of the 2015 Pulitzer Prize for fiction

•  Winner of the Australian Prize for fiction

•  A Library Reads Favorite of Favorites

Historical fiction comes in many forms. Sometimes the works are based on real people in real places in a re-creation of events. Sometimes fictional characters are placed in real events.

The story takes the reader on a journey through the life of Marie-Laure LeBlanc, living in France with her father, a locksmith who works for the Natural Museum of History.

While Marie-Laure goes blind at age 6 in Paris, Werner Pfennig finds old radio parts and builds a radio on which his sister and he sit in the attic of the German orphanage where they listen to a French professor broadcast educational science lessons.

The narrator shifts across time and place to allow the reader to become invested in the lives of these two characters.

Doerr explores the evolutionary process of growing up during a time when the world seems turned on its head, choices determine whether one lives or dies, and no choice has a guarantee attached to it.

Another striking aspect of the novel is the structure, which fades in and out of the lives of Marie-Laure, Werner, and their allies and antagonists, taking the reader through pre- to post-World War II and across Western and Eastern Europe before all events, people and situations converge.

There are moments in the book that are told with stunning stillness, presenting a quiet so filled with emotion that the reader should not be surprised by Doerr’s ability to deliver love, loss, longing and acceptance on the edge of each sentence.

For history buffs, Doerr immerses the reader into the matriculation of Hitler’s Youth regime at the same time he shows the impact of Nazi occupation through the ears of a child who cannot see.

All the Light We Cannot See exposes the truth of war on people, how they emerge from suffering and benefit from the choices made for them and by them.

Doerr’s narrative leaves the reader reflecting on all that we see and cannot see before, during and after each moment we live, and is a reading experience well worth every word.