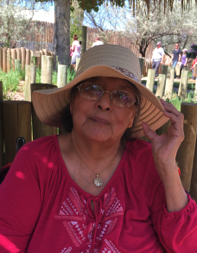 Adrienne Amelia (Slides Off) Bruguier entered the spirit world, Monday, August 31, 2020 at home with her family.

In compliance with the CRST Tribal Directives, a funeral service began at 10:00 a.m. Tuesday September 8th, 2020 at the CRST Powwow Grounds, Eagle Butte SD with Vernell Sitting Crow officiating. Burial followed at the Black Hills National Cemetery, Sturgis, SD with Mother Margret Watson presiding.  A procession from the 4-mile was at 9:00 a.m., Tuesday, with visitation until the start of services. Luce Funeral Chapel of Eagle Butte has been entrusted with Adrienne’s arrangements.

Our mom was born December 14, 1947 at the Cheyenne Agency, SD to Owen and Elsie Slides Off.  Mom attended Cheyenne Eagle Butte School graduating in 1966. After graduation she went on the BIA Relocation Program to Pasadena, California. She returned in 1967 and had her daughter Denise. In 1969 she met her future husband Ivan Bruguier. They were married on April 26, 1970 and had Delma Dawn in October 1970.

Our mom worked at several places throughout the tribe and BIA but was best known as a homemaker who not only raised her own children but also helped raise many of her nieces and nephews over the years.

Adrienne was able to be a voice for others, an exceptional advocate for her tiospaye, and was a force to be reckoned with.  Adrienne was a role model for her children and all her takojas. She was a well spoken college graduate who used her education to be a voice in the community.  She was knowledgeable of tribal rights, laws, and government and would speak up as a voice of the Lakota people.

Adrienne was a fluent Lakota speaker and honored both her Lakota and Episcopal upbringing. She was a lifelong member of the Episcopal Church and also served as a lay reader.

Adrienne and her husband Ivan both served for many years on the Sioux YMCA board of directors.  She was a strong advocate for the Lakota Oyate.

She truly enjoyed being with her family and friends. She had many good childhood friends who continued to keep her spirits up. She will be missed by everyone who knew and loved her.

She was preceded in death by parents Owen and Elsie Slides Off, siblings Herman, Marie, Donald, Milford, Sidney, Delma, and Julie;  her husband Ivan Bruguier and her daughter Delma (Bruguier) Sevier.