Della was born January 13, 1933, to Evelyn Rose (Lawrence) and Joseph Alec Gunville, in a tiny log home on a ranch outside of Whitehorse, on the Cheyenne River Reservation. She graduated from Stephan Boarding School, on the Crow Creek Reservation, and went on to take college courses at Mt. Marty College in Yankton, SD.

After leaving Mt. Marty, Della worked various jobs in South Dakota and even Illinois until eventually landing in Igloo, SD, where she met and married her beloved husband, Monte Birdsall, in 1957. She followed Monte to Camp LeJeune, NC, where he was serving in the Marine Corps. He mustered out in 1958 and brought his new young family, wife and son, home to Edgemont, SD. In 1961, Della and her family, now numbering five, moved to Mobridge where they remained until 1970.

In 1970, Della and family relocated to Pierre, SD, where Monte was given the opportunity to buy into a boot and shoe store. Della was always his “Girl Friday” and right-hand in everything. They expanded their business to Rapid City in 1978, eventually selling the Pierre business. They moved the business, one last time, to Hot Springs where they retired in 1998, selling the business to their daughter and son-in-law.

Della had a big heart which touched the lives of many people – family and friends – even expanding to become “Grandma” to many foster children over the years. More important than that were the lives that touched her and touched her deeply.

She was preceded in death by her beloved husband of 50 years; her parents; four brothers, Milbert Gunville, Elmer Gunville, Jerome Gunville, and Harlan Gunville.

The family is pleased to suggest memorials to Regional Home Health & Hospice at 224 Elk Street, Rapid City, SD 57701. Bless the wonderful caring hands of nurses and aides like Anne and Solada.

Arrangements have been placed in the care of Chamberlain McColley’s Funeral Home in Hot Springs. 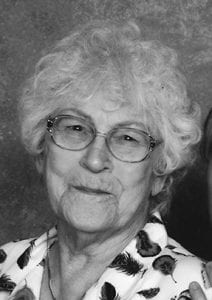