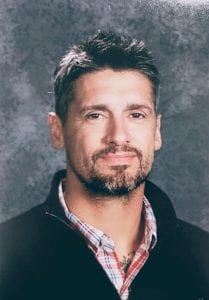 He is the father of four children, daughters, Teylor, Skylar, Bryar, and son, Zander. Albers, who was born in Pine Ridge, spent his childhood in Kyle and lived there until the fourth grade. His family moved to Sisseton until eighth grade, and then moved to Takini, and that is where he graduated from in 1994.

Albers then attended University of Mary in Bismarck, ND and graduated with a Bachelor’s in Science with an emphasis in biology and rehab services. He also holds a bachelors in Dietetics from the University of North Dakota.

He was a basketball standout during his high school and college years. Albers describes himself as “an educator by nature and at heart” and said he feels very fortunate and proud to come back to Takini School and give back to the students and community.

“One of my goals growing up was to obtain a college degree and to play college basketball. I’ve been very fortunate and blessed to have done both. Now I get to use my experience as a basketball player to teach our amazing students here on the west end,” said Albers.

He is dedicated to using his many roles to make positive changes in the lives and overall well-being of the students. Since coming on board with the school almost two years ago, Albers said there have been many positive changes, with an important one being “putting students first in all aspects- culturally, academically, and emotionally.”

In addition, the school has worked to improve parent/guardian and community involvement, which has resulted in increased attendances during parent teacher conferences and parent activity nights.

“This list included family situations, education, college, jobs, demographic information, geographic information and anything culturally relevant. I explained to them to think long term, but to plan in short-term increments,” said Albers.

He explained that at least once a week, he and his students review their lists and gauge their progress.

“I make sure to inform them that making changes in their future endeavors is perfectly fine, and most times, inevitable,” he said.

As an educator and coach, Albers said he uses humor and lessons from his life experiences to help guide students in their daily academic and personal lives. He said building connections and engaging with students is important to his teaching and coaching style.

Although he has accomplished many things in life and holds many titles, Albers said, “Being a father is the greatest thing I’ve ever done, and by far, my greatest accomplishment.”