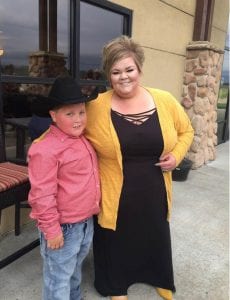 In May of this year, 29-year old Kelsie Kay Haskell launched her business, Kelsie Kay’s Coffee Depot in the Four Bands Incubator in downtown Eagle Butte.

Kelsie said it was during her years in high school that she realized two things – she loved coffee and she loved retail. With those two in mind, she understood the need for a coffee shop in Eagle Butte and took it upon herself to create one. The decade-long journey in doing so was filled with logistical and personal challenges that she had to overcome.

“I know ten years sounds like an outrageous number but with the lack of infrastructure here, it’s really hard to rent any usable space. Losing two of my best friends, little sister and my grandma all since 2014 wasn’t easy either. I could’ve gave all of this up and succumbed to depression, suicide or drugs, but I persevered through that,” said Kelsie.

Much has also happened during her 10-year journey, including motherhood. Kelsie is a single mother to her eight-year old son, Justin, who is now at an age where he is the perfect helping hand. Kelsie is also a self-taught beader and uses the extra money from her craft sales to support her family.

In her coffee shop, Kelsie uses the highest quality products to produce the best possible flavors and drinks for her customers.

“We use espresso beans roasted in North Dakota at Mighty Missouri, and our beans are overnighted for the freshest taste. A local favorite is the iced caramel latte. We serve different flavored drinks along with Italian sodas. We have a large variety of teas – anything from black tea to Moroccan mint,” said Kelsie.

Customer service is also an important ingredient for success.

“I have the best customers. All of my regulars don’t even need to order, I know what they want when they walk in the door. Customer service is what I strive for. I was raised in retail! I’m genuinely a happy person. I try to brighten up anyone’s day who walks through my door,” she said.

Along with expending her menu, Kelsie said she hopes to one day open a store front in downtown Eagle Butte.

“I grew up on Main Street and that is where my heart is. I would love to have an old fashion styled bar with couches and tables available for my customers. I am a soup genius and if I just had the space I think people would buy it,” she said.

Kelsie’s advice to future entrepreneurs is that anyone who wants to open a business should start small and make careful decisions when purchasing items for their business. She also encouraged other entrepreneurs, adding, “There is such a need for small businesses in all of South Dakota. I have two employees. That’s two more people on CRST with jobs.”