A new twist on Peter Pan

Each year, the Missoula Children’s Theatre works with Cheyenne-Eagle Butte Schools to bring to life playscripts through acting, song and dance. This year, a cast of over 40 C-EB students performed the play, Peter and Wendy, which is an adaptation of Peter Pan.

True to classical form, Wendy, John and Michael meet Peter Pan and are whisked away to Neverland. Their parents, Mr. and Mrs. Darling quickly find that the children are missing and embark on a quest to find them.

In Neverland, we meet the Neverlanders, Tiger Lily, the Neverland Creatures, and the Lost Boys. Peter tells the boys that he has brought them a mother, who will tell them stories every night. A jealous Tinker Bell throws a fit and screams that Wendy must leave.

Peter deescalates the situation and the cast break into a song. Soon, Captain Hook and his pirates announce that they have captured Tiger Lily, and Hook schemes up a plot to frame the Lost Boys for her abduction. The lie works and the Neverlanders confront the Lost Boys, leading to a hilarious fighting scene, complete with arm wrestling!

Peter helps the groups see through Hook’s lies, and a confused Wendy asked who Captain Hook is. This cues the song, “You Need to Know My Name”, which leads catchy standoff musical between Hook and Peter.

Clouds also make special appearances, with younger students dancing and expressing the different ways clouds affect the weather. They caused wind, rain, and even a hurricane!

Throughout the entire play, Mr. and Mrs. Darling, along with their dog, Nana, travel the world looking for their children. First they are in Hawaii, then the North Pole, and then, they end up in Eagle Butte! Nana holds up a poster for the play which takes place at the C-EB Auditorium.

In the end, the children safely return home to the delight of their parents, and bring with them, all that is Neverland! The Darlings agree to all the Lost Boys, the pirates, and even Captain Hook! In the end, they are one big happy family.

PHOTO BY ALAINA
BEAUTIFUL BALD EAGLE
Top photo: Mr. and Mrs. Darling, played by Lai’Ty Brown Otter and Hope Shorty, keep warm as they traverse through the North Pole with their dog, Nana, played by Mia Hopkins. Throughout the play, the trio travel around the world looking for their children. Hilarity ensues when the trio end up in Eagle Butte. 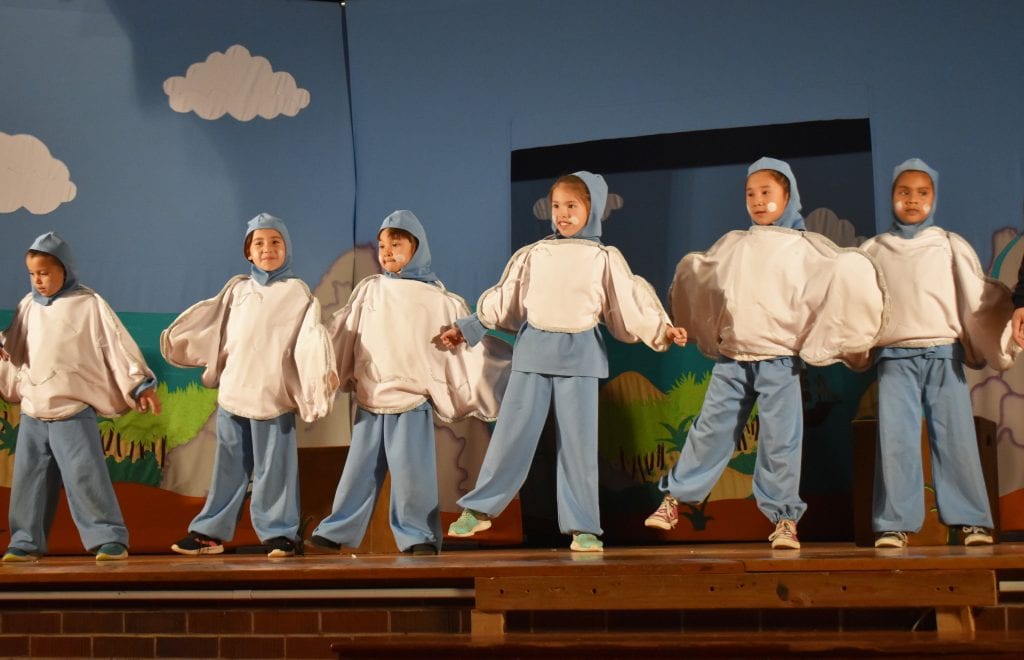 PHOTO BY ALAINA BEAUTIFUL BALD EAGLE
Clouds dance their way into the hearts of audience members. 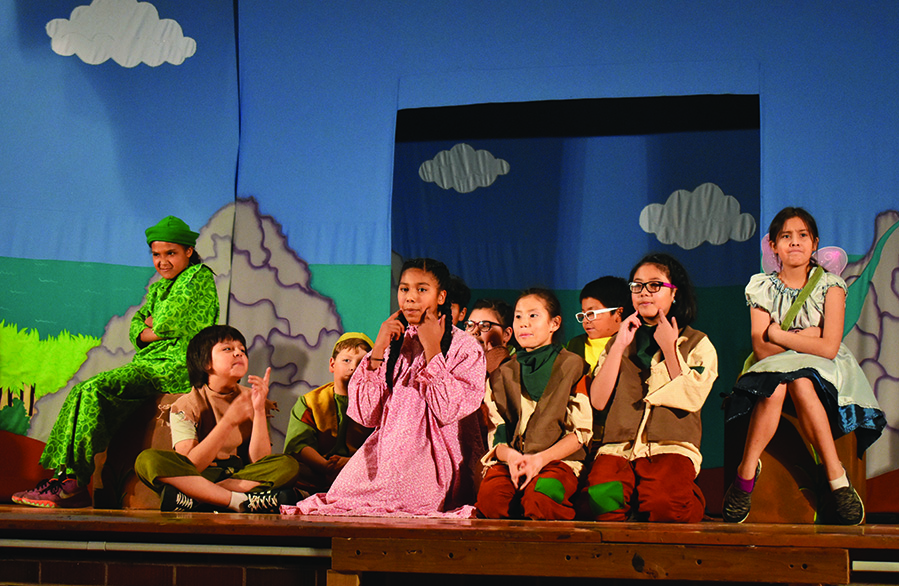 PHOTO BY ALAINA BEAUTIFUL BALD EAGLE
Peter Pan and Tinker Bell are annoyed and upset as Wendy (center) sings a lullabye after announcing that she, Michael, and John will return home to their family. Peter said he never wanted to grow up and wished to stay in Neverland. 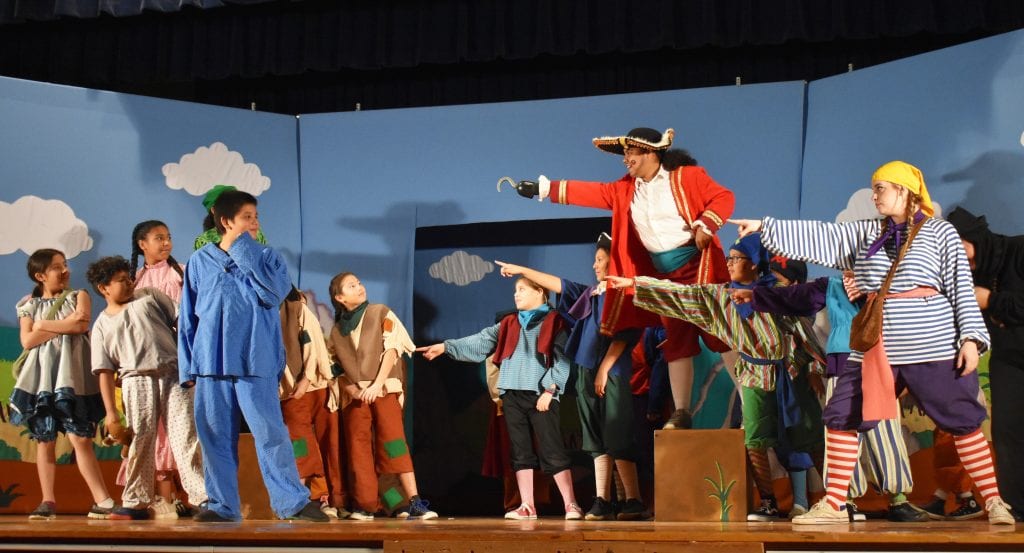 PHOTO BY ALAINA BEAUTIFUL BALD EAGLE
A musical confrontation ensues between Captain Hook and his band of pirates and Peter Pan and his group of Lost Boys. The characters pointed at each other while singing, “You need to know my name!” During the play, the audience burst into applause after each song and dance number. The play took place at the C-EB Auditorium on Friday evening and Saturday afternoon, Nov. 22-23. 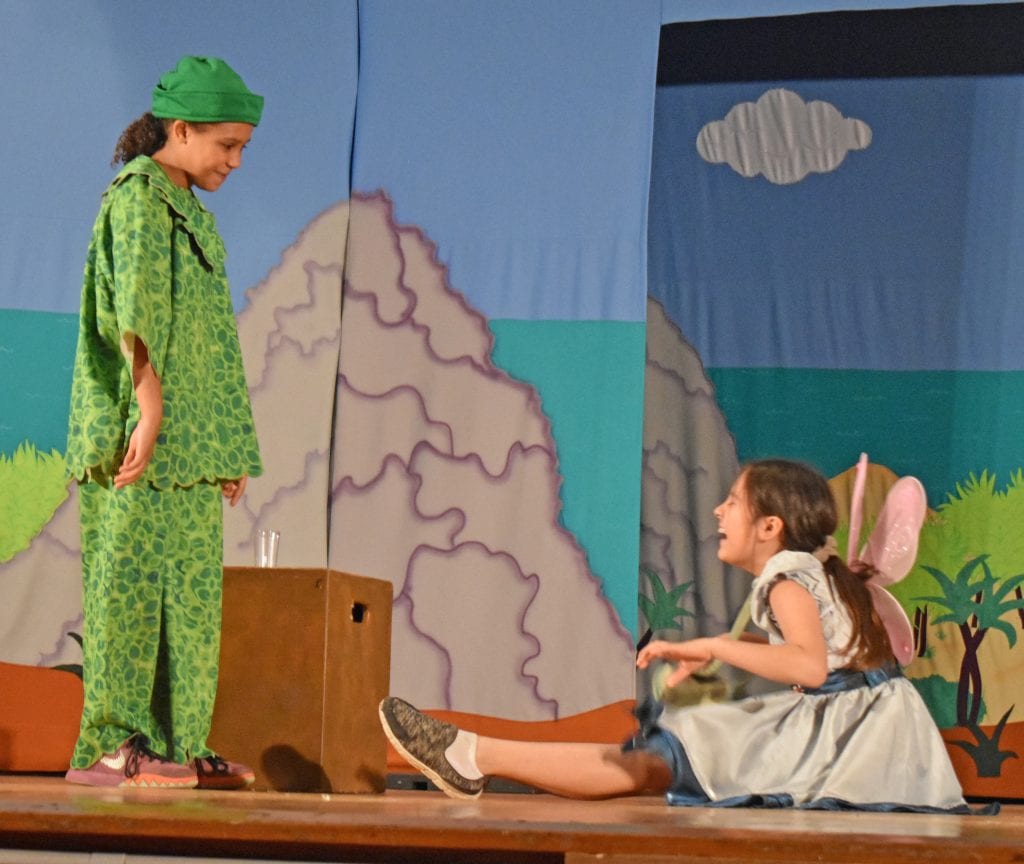