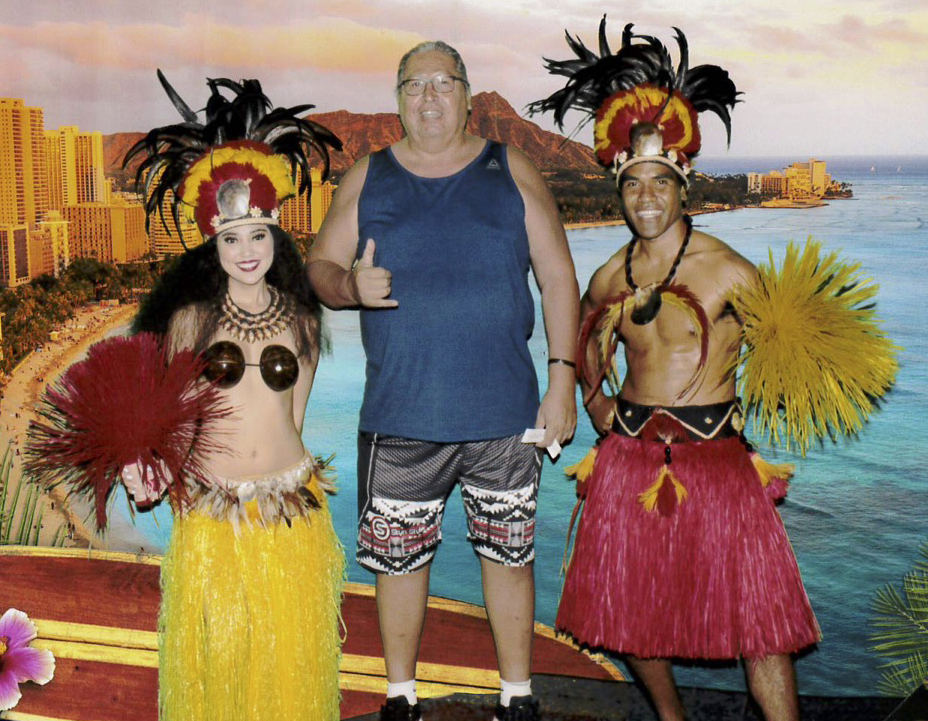 EAGLE PHOTO BY DARREL EAGLE STAFF
Darrel Eagle staff poses with Hawaiian dancers at a luau feast during his trip to Oahu. Visiting Hawaii was something he always hoped to do and said he learned a lot from his adventure, and he plans to visit again.

Darrel gave himself a Christmas gift of a vacation to the island of Oahu. When Darrel flew out of Bismarck to Las Vegas on December 20, the temperatures dipped below freezing and there was snow everywhere, but when he arrived in Honolulu the next day, Darrel said he had experienced something he never had before- for the first time in his life, on the first day of winter, the temperature was 75 degrees and there was absolutely no snow in sight!

For the next five days, he enjoyed visiting the island, going on tours, meeting the locals, enjoying fresh seafood and relaxing on Waikiki Beach.

It was not always sunny though– there were times when the sky was overcast with sprinkling rain. Darrel explained that he thought the temperature would drop, as it tends to happen in South Dakota, so he wore his sweater to the beach, but instead, the temperature remained warm, despite the cloudy skies.

“I got to the beach and walked around and thought, ‘So this is what everybody is making a big fuss about.’ It was overcast and sprinkling so there were not many people there,” said Darrel.

After his visit to the beach, Darrel said he found a hole-in-the-wall restaurant where he ordered a hamburger with a slice of pineapple on in. When he returned to his hotel, the concierge got after him and suggested that he should enjoy the local cuisine, rather than hamburgers. So, for the rest of his trip, that’s what he did- Darrel ordered fresh seafood as often as he could, and found out that he enjoys eating prepared shrimp that is peeled and “ready to just pop into my mouth.

“The huli-huli chicken was also delicious. It’s like teriyaki chicken that is cooked on the grill. I think I lost a few pounds because I hardly ate any meat. I found a nice steak place and ordered shrimp again that had a nice dip. I kept going back there and they got to know my order,” he said.

During his visit, he learned a lot of things about the island with through the guided tours he went on, and at at one particular scenic overlook, a guide explained that once you past a certain street in downtown Honolulu, “you were considered in the country, and the other side was considered, ‘the city’, but it was all the same,” he said.

Keeping track of directions also proved to be challenging, perhaps because he was on an island, or because everything was so new to him, said Darrel.

One time on a guided tour, the bus driver stopped at a beach and encouraged everyone to walk out to the ocean and enjoy the waters.

“I took off my shoes to try it out, but it was one of the beaches where you just sink in. I wanted to listen to the ocean, so I pulled out my phone, and took pictures, and almost fell because I was sinking into the wet sand,” said Darrel, laughing as he recalled this moment.

“I turned around and looked back up and saw that I walked about 50 yards. I thought ‘Oh god, I got to walk back up there’. I just kept sinking in. It was a workout,” said Darrel.

The tour guide was a surfer who was happy to share tips and knowledge about the sport. He pointed to surfers on the water and said that you could estimate how tall a wave was by comparing the surfer to each wave. As the surfers rode by, Darrel said the waves were about 8 feet high; however, the guide informed him that at the height of surfing season, waves can get as high as 50 feet!

The guide also offered this advice to Darrel: “You respect the water and never turn your back on it because the wave can knock you over, and when it’s withdrawing, it can suck you back in with it.”

Darrel said the roads on the island are narrow two-lane roads and the guide told them that during the summer days, people park and camp out along the highway, causing heavy traffic and long wait times.

On another day, Darrel visited the Dole Plantation where he ate pineapple ice cream, which was the only flavor available.

“If you wanted to send a pineapple home, you had to special order at the plantation and they would ship it because you can’t transport them on the plane,” said Darrel.

While at the plantation, Darrel said he learned some history about the area. A local shared with him that during the attack on Pearl Harbor, and the Japanese pilots used a gap in the mountain range to their advantage, and would fly their planes through the gap, rather than flying around the entire mountain.

In an ominous moment, a local stated, “Most of the guys who died were still in their pajamas and underwear. No one was expecting it because the attack happened early in the morning.”

On Christmas Day, Darrel went on another bus tour that took him all the way around the island, but it rained all day, and the bus driver said it was first time that had ever happened. For his Christmas meal, Darrel said he enjoyed more huli-huli chicken.

Interestingly, Darrel compared downtown Waikiki to Las Vegas saying, “it was like Vegas without the gambling- there are expensive stores everywhere.”

There were many upscale retailers such as Gucci and Armani, and at one store, Darrel said the storefront advertised “Native jewelry”. Curious, he went inside and found an inlayed arrowhead charm and he when he inquired the price, he was told it was $4,700.

“I told the lady, ‘I’ll just wait until the next powwow’,” he said.

In another instance, he found a photo of an eagle that he liked and when he asked the manager how much a print would cost, he was told $46,000!

Another important stop he made was at the Pearl Harbor National Monument. A 15-minute video about the attack was shown before Darrel and a group of visitors was loaded onto a boat before making their way to the USS Arizona. At the Pearl Harbor museum, he saw shredded torpedoes from that day, bloodied uniforms of sailors, and planes from that era.

Darrel said it was a very quiet tour and he learned a lot from it.

The next day, Darrel flew back to Bismarck where he had to quickly adjust back to the cold temperatures. Visiting Hawaii was always on Darrel’s bucket list, and he said vacationing there during Christmas was a dream come true.

“I never thought I’d be able to make it out to Hawaii- a poor little Indian boy from Red Scaffold out on an adventure in Hawaii,” he said.

Part II of Darrel’s trip will be featured in next week’s edition. 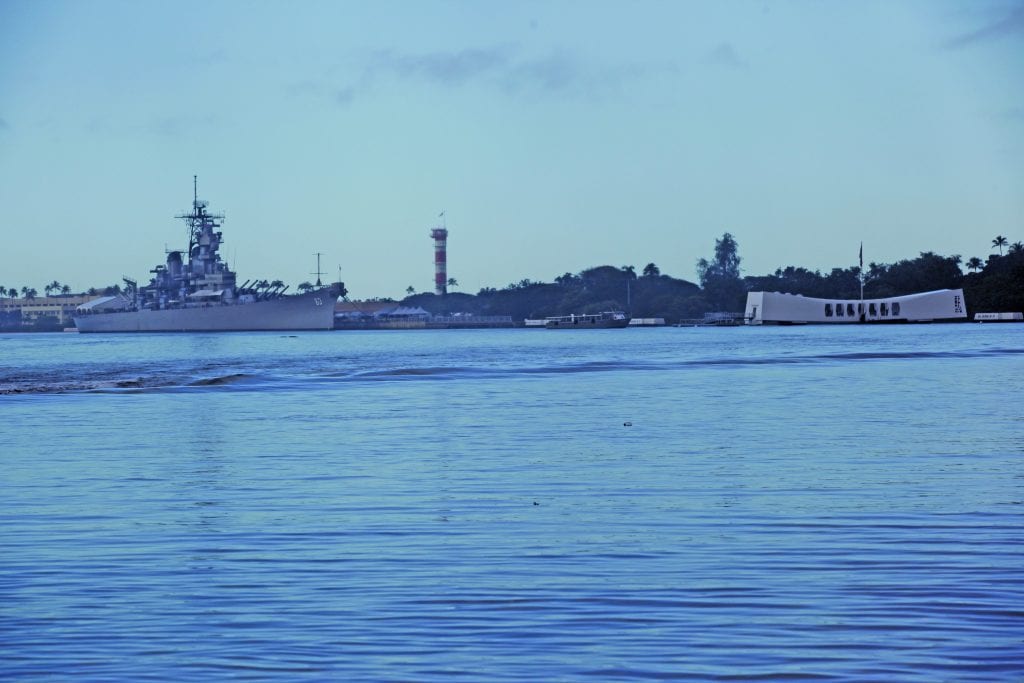 EAGLE PHOTO BY DARREL EAGLE STAFF
A solemn view: Darrel visited the Pearl Harbor National Monument and toured the historic center’s museum. This photo is taken from a boat on the way to the monument. 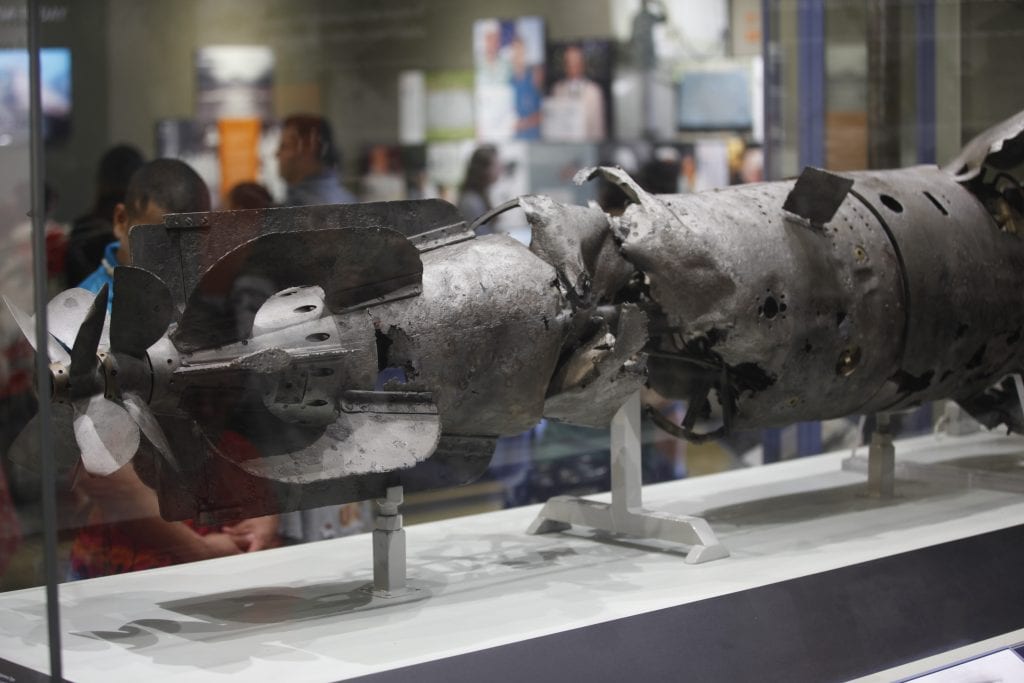 EAGLE PHOTO BY DARREL EAGLE STAFF
A shredded torpedo from the attack on Pearl Harbor was one of the many items on display at the Pearl Harbor National Monument museum. 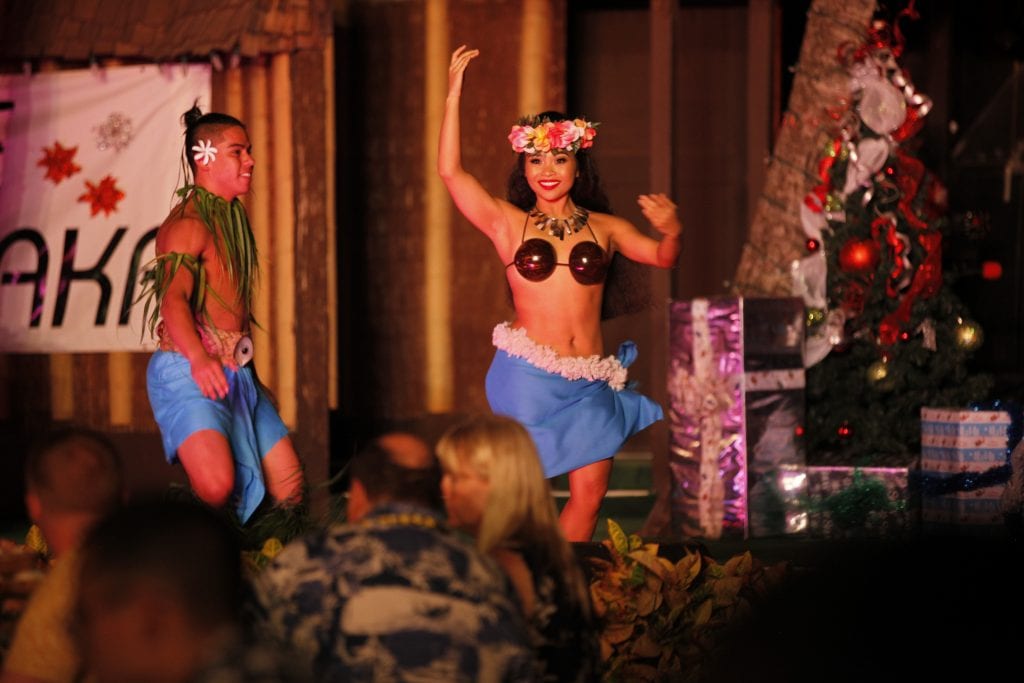 A luau dancer entertains the crowd.

EAGLE PHOTO BY DARREL EAGLE STAFF
This cascading waterfall was one of the many tour stops for Darrel, who learned about the native plants and flowers on the island.