Not only has Seth Brings Plenty worked with George RR Martin, author of the best-selling book series, “A Song of Ice and Fire,” which was adapted into the hit television series Game of Thrones, he is founder and owner of Ota Au Films, a broadcasting and media company based out of Eagle Butte.

Did I mention Seth is only 20 years old and is a 2018 graduate of Cheyenne-Eagle Butte High School?

Ota Au, Lakota for “Brings Plenty” is the brainchild of Seth, who went to the American Indian Art Institute in Santa Fe, New Mexico and is currently taking business management courses.

Seth works with his younger brother, Brett and his good friend, Colin DuBray to produce unique photographs of Cheyenne River – their most well-known photos are mixtures of wakinyans (Thunder Beings) and space.

One of the most shared photos on the company’s Facebook page, captures the exact moment of a lightning strike and set to a background of a night sky filled with bright stars.

The photos caught the attention of many people on social media, and from there, their photos were shared and went viral.

The equipment the trio use is just as unique as their brand- according to Seth, they use a mirrorless camera that has features best suited for low-light shots, ideal for capturing stars and meteorites.

Seth said the camera has a manual focus which results in a carefully planned “cinematic and emotional feel.”

“People always tend to take the same photos. We wanted to add a different sense to photos. The aspect ratio, framing and composition of a photo are important. We scan the area and environment before taking photos, and keep shots low to the surface,” said Seth.

Not only does the trio take astonishing photos, they also produce films, and recently released a short film about Lakota language preservation, much to the elation of tribal members, said Seth.

“Language is an important issue. We knew about the controversy 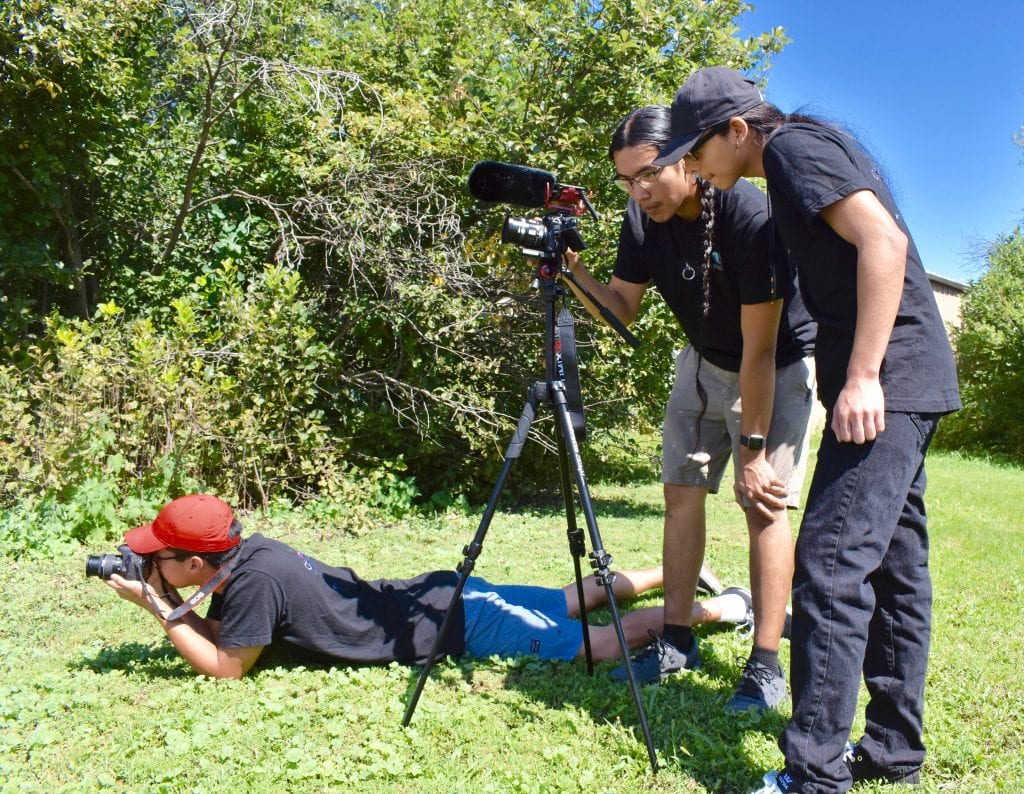 Dynamic trio: Seth Brings Plenty, along with his brother, Brett, and his good friend, Colin Dubray, capture a moment with their camera equipment. Brings Plenty founded Ota Au Films, which is based in Eagle Butte.

about Lakota language on Cheyenne River and that’s why we wanted to do it. In the film, Emmanuel Red Bear talks about the language dying. It’s a pretty daring video to take,” said Seth.

The film gained positive reviews and Seth says he was contacted by a professor who requested to use the film as part of his lecture series.

Short films are another important aspect of the company’s mission, said Seth.

“We wanted to create stories for our people in South Dakota, North Dakota, Rapid City, and with native communities in general. Some of these stories are important, especially for the elders to get out their stories that people have never heard,” said Seth.

Future plans for the company are boundless and include expanding their filmmaking, taking portraits, and creating digistories.

“We want to keep our films authentic and original and keep making short documentary films of the people in the area,” said Seth.

As for advice he would give someone wanting to go into the fields of photography and videography? Seth says it is simple, “First, purchase a camera, go to YouTube to look up how to take basic photography. If you are really wanting to pursue it, there is a good school in Santa Fe, New Mexico.”

For more information about the Ota Au Films company, visit their Facebook page.