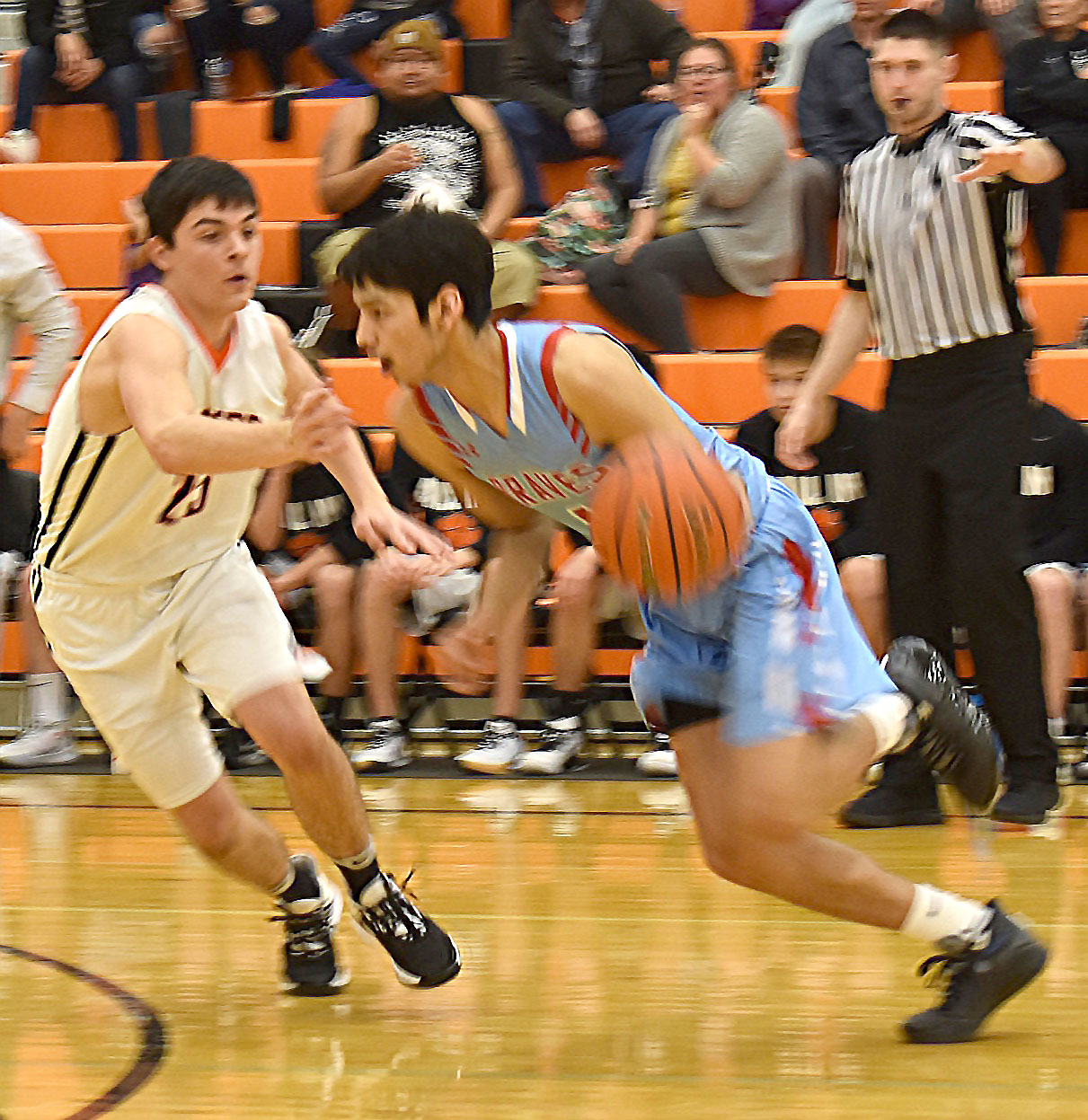 PHOTO BY JAY DAVIS
Riley Hodgkiss drives the ball down the court during the Braves/Tigers game on Feb. 4. Hodgkiss was the Braves’ leading scorer with 19 points.

The Cheyenne-Eagle Butte Braves and the Mobridge-Pollock Tigers have 80 years of rivalry history, with 122 games between the basketball titans. And on Tuesday, February 4, the teams clashed, once again, in what would be an exciting and memorable chapter in their long-storied rivalry.

Going into the competition, the Tigers had won 63 games, with the Braves victorious 59 times in all their basketball history. Between 2014-2017, C-EB won all 8 of the games between the two teams.

Tuesday’s game was not only for bragging rights- the winner would be ranked number two, with the losing team ranked third in the Class A Region 6 division.

Both teams were hot going into the contest, each coming in with 3-game winning streaks. The Braves, were ranked 2nd with 43.182 seed points, and the Tigers trailed 3rd with 42.5 seed points.

The players, coaches and fans all recognized the importance of this game, and the Mobridge-Pollock “House On The Hill” high school gymnasium filled with supporters of both teams.

In the first possession, the Tigers scored 2 points with the Braves’ Spencer Moran quickly answering with his own shot beneath the basket.

In the first quarter, both teams were evenly matched on both sides of the ball, going back and forth on the scoreboard. Their defenses held steady and defense was the name of the game, ending the quarter 10-9 with the Tigers ahead.

The Braves opened the second quarter with the first possession; however, they lost the ball to a turnover but C-EB’s 6-foot junior Rance Harrison stopped the Tigers’ drive with an explosive block, sending the crowd into a frenzy.

The first and second quarters were dominated by defense which kept the scores low. The teams were evenly matched and they went into halftime with a 1-point difference and the Tigers leading, 17-16.

To open the third quarter, a Braves’ turnover resulted in fruitless attempts by the Tigers to score under the basket. Spencer Moran pumped up the crowd with an explosive dunk, putting the Braves in the lead, 20-17.

At the end of the third quarter, the score was even, 34-34. As squarely matched as the teams’ defenses were, so were their offenses. Both teams scored just as many points in the quarter as they did in the entire first half.

The fourth quarter was much the same as the previous quarters- an exciting duel and showcase of fast-paced plays and stops.

With about 30 seconds left in the game, the Braves were up by 3 when the Tigers took the ball down the court forcing C-EB’s defense to commit stopping a drive towards the basket. the Tigers passed the ball back out and took a 3-point shot to tie the game at 50.

The Braves played the clock and attempted a last-second score but couldn’t get it to drop, resulting in overtime.

To start the overtime showdown, the Tigers quickly made 6 unanswered points before the Braves called a timeout. The score was 56-50.

C-EB’s Leon Brown Otter was fouled and sent to the free-throw line. The 6’2” senior took advantage of the free-throws, scoring two baskets, bring up the Braves’ score to 52.

As the action heated up and tensions flared, Tigers player Bryston Goehring fouled out of the game, sending Braves’ player Travis Lofton to the free-throw line. Lofton’s first attempt was good, but he missed the second basket and the Tigers quickly recovered the rebound.

The Tigers then played keep-away, running down the clock before they scored a 2-point basket.

With less than a minute to play, Travis Lofton was fouled again and he made good on 2 out of 3 attempts, bringing the score up, 58-55.

With 7 seconds left, C-EB senior Riley Hodgkiss was fouled and he made his first shot. Hodgkiss then intentionally missed his second shot,  and quickly grabbed the rebound before tossing it to teammate Nevyn Mendoza. Taking a shot from the 3-point line, Mendoza missed and the Tigers rebounded, with time running out.

The loss resulted in Mobridge-Pollock taking 2nd in the division, knocking the Braves to 3rd place. Leading scorers for the Braves were Hodgkiss, 19 points; Harrison, 9 points, Brown Otter, 9; with Moran and Mendoza contributing 6 points each.

The Tigers took advantage of being at home in a well-fought overtime game. We won’t have to wait long to see the next clash of the basketball titans- they will face off again on Monday, February 24 in Eagle Butte.

The Braves will have home-gym advantage. 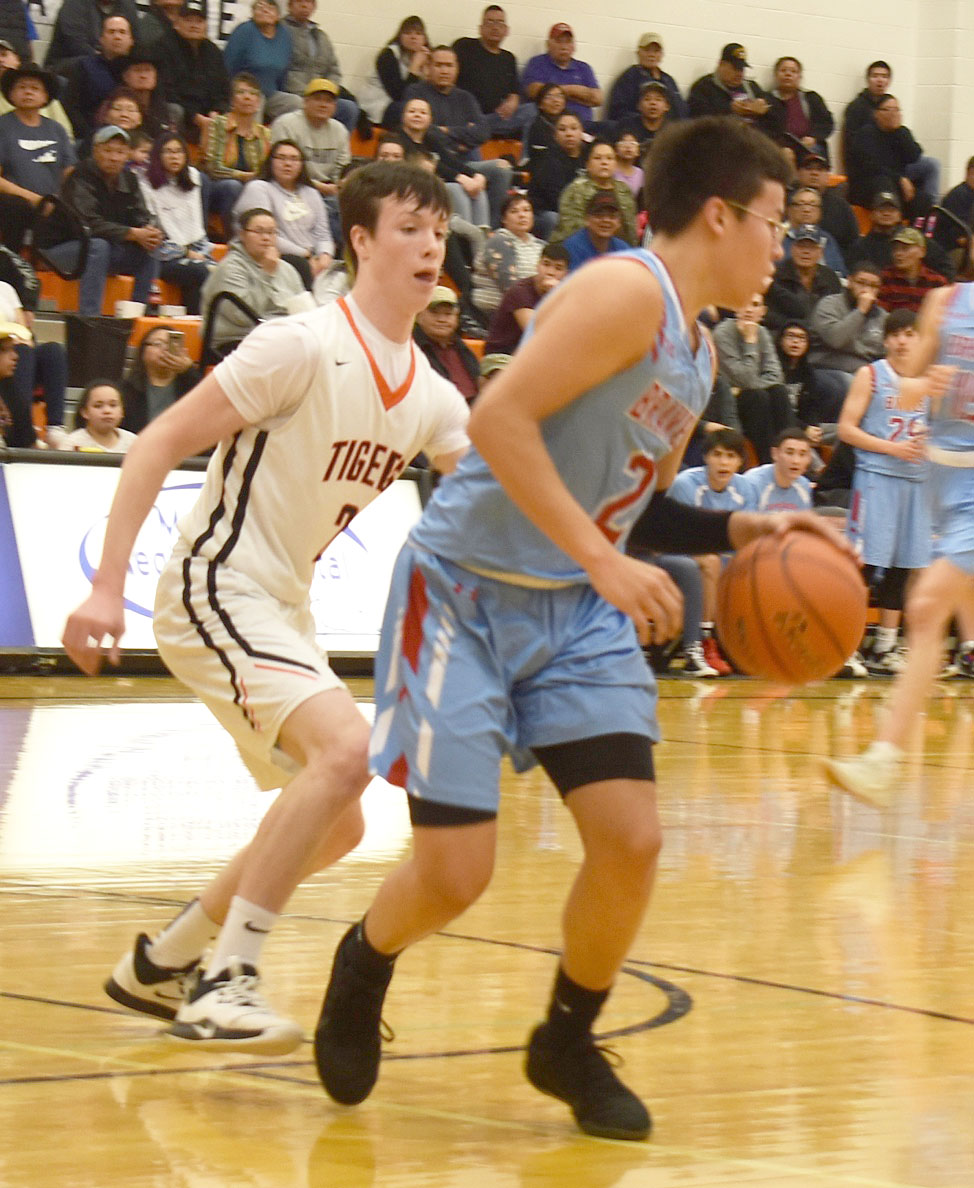 PHOTO BY JAY DAVIS. C-EB junior Rance Harrison’s swiftly handles the ball during the game against the Tigers. Harrison scored 9 points in the contest.