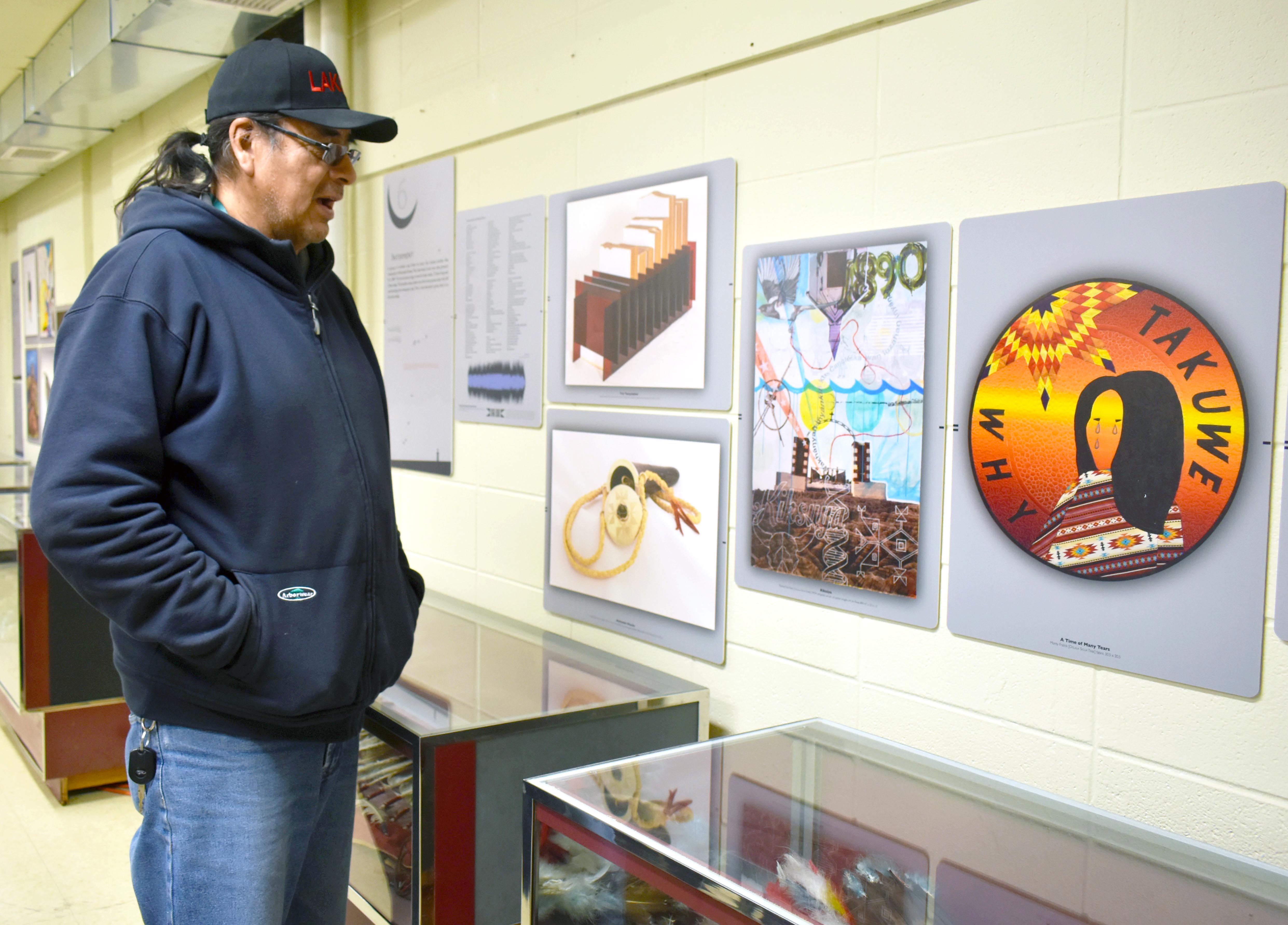 EAGLE PHOTO BY ALAINA BEAUTIFUL BALD EAGLE
CRST Cultural Preservation Officer Dana Dupris takes a moment to gather his thoughts before sharing his family’s tragic history of the Wounded Knee Massacre in 1890, which claimed the life of his great-grandfather.

Over 400 people visited the Takuwe exhibit which was featured for three months at the Lakota Cultural Center in Eagle Butte. The community-based version of the educational art exhibit focused on the 1890 Wounded Knee Massacre was on loan from the Center for American Indian Research and Native Studies (CAIRNS), located in Martin, South Dakota.

Takuwe, translates to English meaning, “Why”, and the title provokes thought and questions about why the massacre occurred, which claimed the lives of over 300 unarmed Lakota women, children, elders, and men on December 29, 1890.

The exhibit was divided into seven chronological sections: Belief, Assassination, Trek, Massacre, Interval, Interment, and Proposal. Each section showcased a time leading up to, during, and after the slaughter.

“Belief” explains how He Dog, Flat Iron, Yellow Knife, Brave Bear, Twist Back, Yellow Breast, Short Bull, Kicking Bear, and Broken Arm traveled to Nevada in September 1889 to learn about the Ghost Dance from Paiute religious leader, Wovoka. This delegation of Lakota’s returned home and shared what they had learned with other Lakota people.

The accompanying exhibit pieces displayed poems and a completely unique feature—the ability for visitors to scan a QR bar code for interactive learning. Visitors were able to hear recordings of traditional songs, “Charmaine’s Song” and “Honor Song for Sitting Bull”, as well as contemporary songs by Lakota musicians which symbolized periods surrounded the massacre.

Quotes from survivors were featured in the “Massacre” section:

“They encircled us like a band of sheep, the older ones were sitting down on the ground in groups smoking, we didn’t think that they would ever do what they did to us, it was all unexpected” –Joseph Black Hair

“I was a boy, my grandmother asked me to take some tobacco over to Big Foot where he was lying, so I took it… Just at this moment there was a big noise; I couldn’t see just what it was but it was sounding like quite a number of gun shots together” – James Pipe On Head.

“In this ravine where we took refuge, most of them were women and children, and of course, defenseless and helpless; above them the soldiers just got near them and shot these people down.” – John Little Finger.

Unlike other exhibits, Takuwe contained a section about what Lakota’s did to commemorate their ancestors killed the massacre, and included a section highlighting the proposed legislative bill, The Chief Big Foot National Memorial Park and Wounded Knee National Memorial Establishment Act of 1992, which was introduced by South Dakota then-Senator Tom Daschle.

The proposed bill would have commemorated routes taken by Chief Spotted Elk (also known as Big Foot, and called Big Foot in the exhibit), enabled feasibility studies for visitor centers on Interstate 90 and on Cheyenne River.

Two sentences printed on a panel explained, “The bill was referred to committee examination and never made it to a floor vote. Two similar bills were introduced in 1993 and 1995, both failing to advance out of committee.”

As word spread throughout Cheyenne River about the unique exhibit, the Cultural Center received more and more visitors, including students from Takini, Tiospaye Topa, and Cheyenne-Eagle Butte Schools.

One such visitor was CRST Cultural Preservation Officer Dana Dupris who took time to share his family’s ties to the Wounded Knee Massacre.

“My great grandfather was at Wounded Knee when the massacre happened, and he was killed. His wife and children survived and they stayed on Pine Ridge. His brother, Iron Lightning, remained on Cheyenne River and helped protect Mary Traversie, the first Indian school teacher around the Cherry Creek area.”

The massacre had separated a family, as it did for many Lakota tiospayes, said Dupris.

“We were at a powwow in Red Scaffold in 1982. There was a man named Nelson Elk Boy who was looking for his relatives and it just so happened that my mother and her sister were there. We saw was this elderly man and first thing, my mother and her sister seen him, and they started crying because his face resembled the face of their father, Grant Iron Lightning. They started crying and saying, ‘Papa. Papa!’,” Dupris said.

Although they had never met this man before, the elderly women instantly knew that they were related. Elk Boy lived in Porcupine on the Pine Ridge Sioux Reservation, and not long after meeting, their families began visiting and spending more time together, explained Dupris.

“From 1890 to 1982, that’s how long it took for us to reconnect. We lost out on all those years. It’s probably different for different families. With all these things (pointing at exhibit), they talk about what they seen at the massacre. It’s a painful part of our history,” Dupris said.

Those sentiments were shared by many of the visitors who stopped by the Cultural Center to view the Takuwe exhibit, with many residents rushing to visit before its scheduled last day on February 28.

The complete Takuwe exhibit is currently on display at Holter Museum of Arts in Helena, Montana. For more information about, visit nativecairns.org. 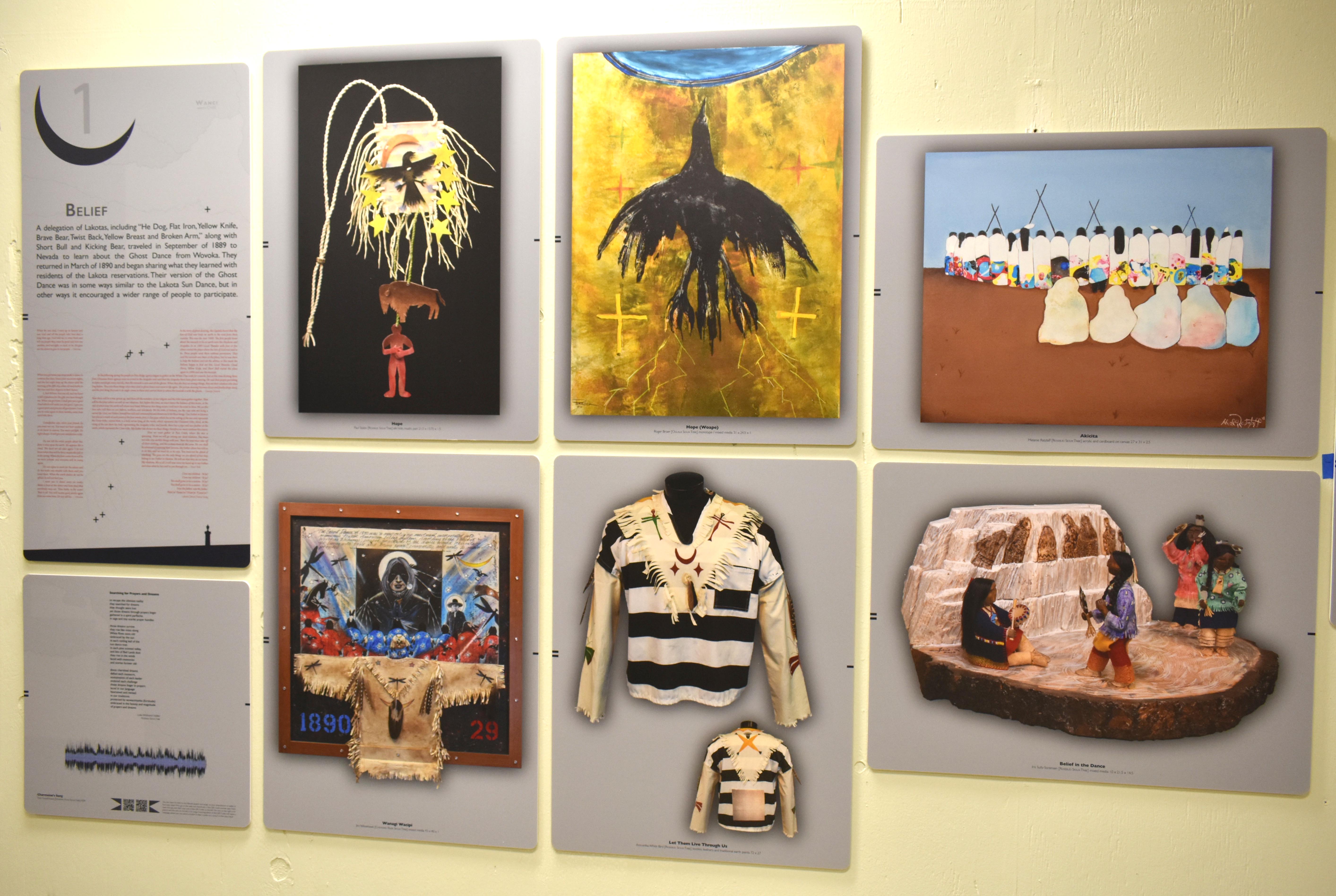 EAGLE PHOTO BY ALAINA BEAUTIFUL BALD EAGLE
The Takuwe Exhibit featured contemporary artwork from Lakota artists depicting the Wounded Knee Massacre, as well as photographs of artifacts from the time period. Paintings from Jim Yellowhawk, a renowned artist from Cheyenne River, was also featured, much to the delight of tribal members. 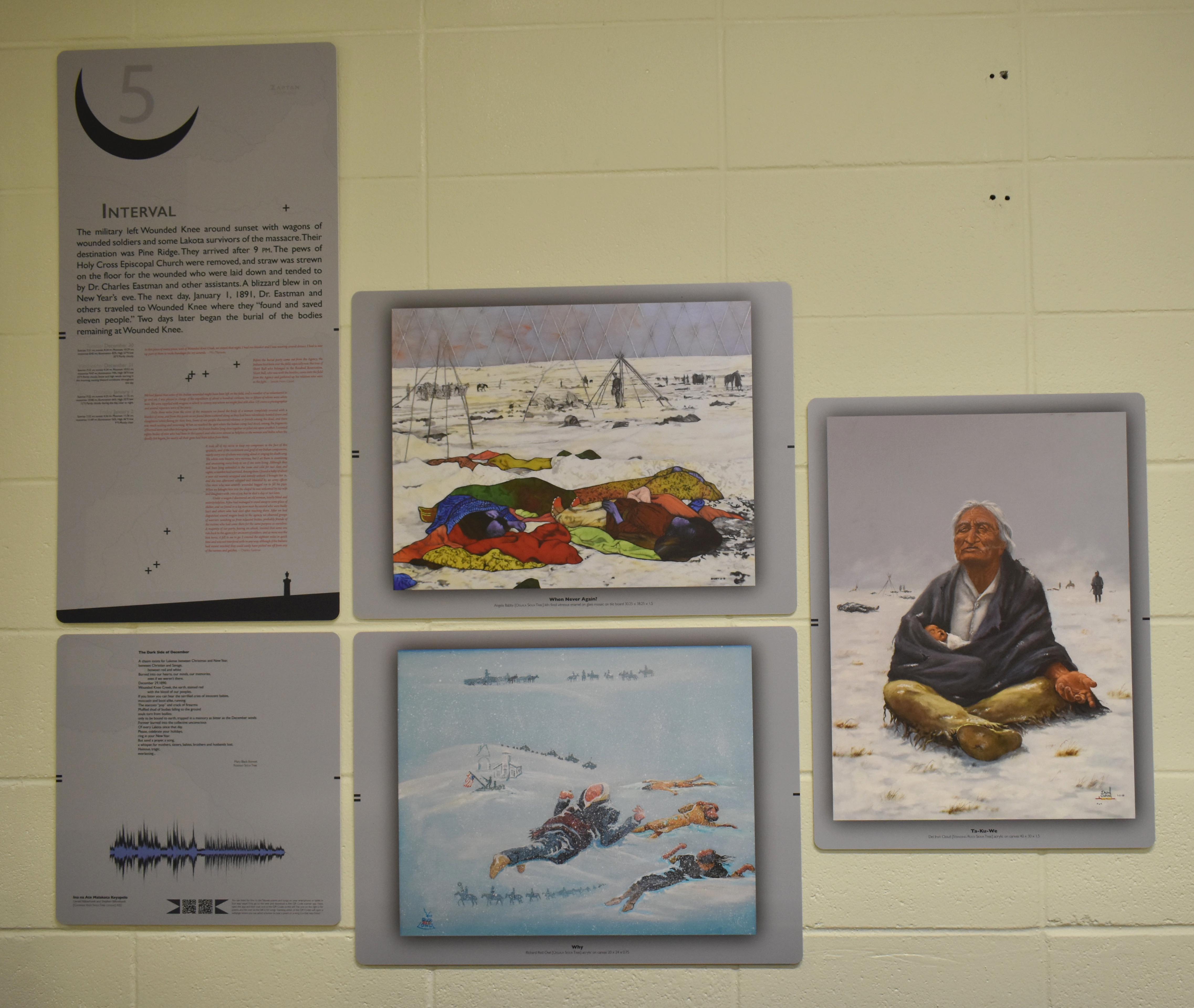