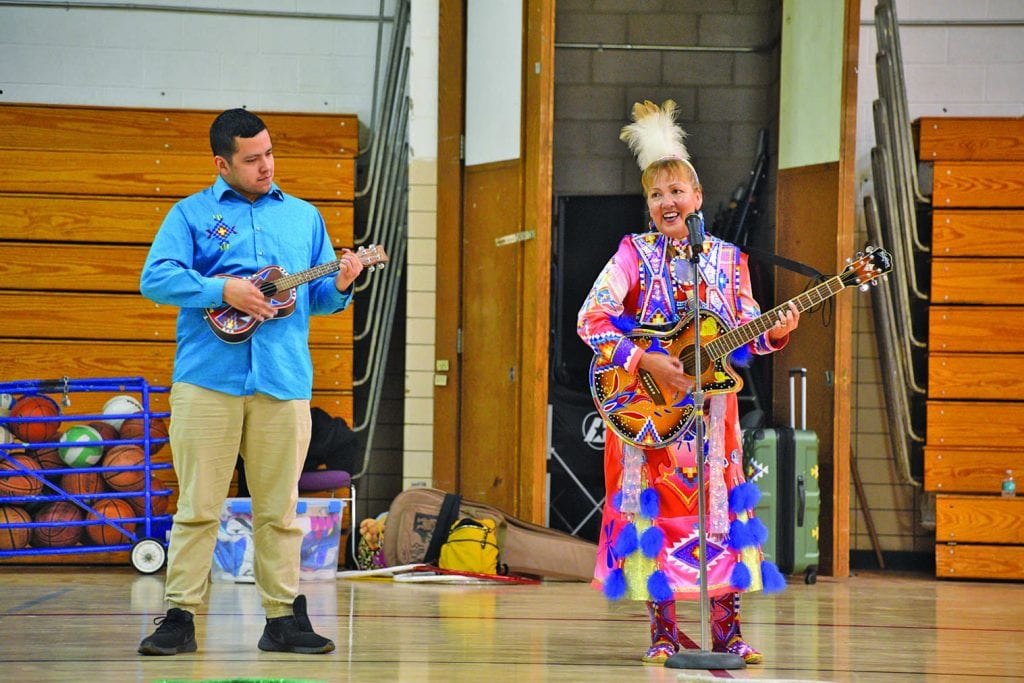 EAGLE PHOTO BY JODY RUST
In the C-EB assembly, son and mother duo Gordon and Jackie Bird perform “Just because,” a song for which Jackie is well-known and that was originally recorded in the early 1990s.

“I want to make everyone happy,” said Jackie Bird, standing in her hoop dancer regalia in front of a microphone, guitar in hand and a bright smile on her face.

Her energy slowly filled the Cheyenne-Eagle Butte High School gymnasium, quiet despite the presence of the high school and junior high students and staff members.

Bird began her greeting of the audience with a song to honor the spirits, and then followed with a few love songs, including “Just Because,” a song with which many students and staff are familiar.

In an interview with Milt Lee on the Wisdom of the Elders, Inc. website, Bird said, “I was born in 1966 and I travel all over the world singing contemporary and traditional and sometimes contemporary and traditional combined. And I also am a hoop dancer. I do some puppetry also. And I work with youth a lot. My mother is an artist. My dad is a musician, and so that’s all I’ve ever grown up with. And that’s why I do the things I do, as I’m really inspired a lot by the creator.”

Reviews of her performances promised an infectiously energetic experience, and her concert for C-EB did not disappoint.

Bird sang, danced and played guitar with the help of her son Gordon Bird, who pumped up the crowd with the song “You betcha Watecha” — played to the tune of “Rock and Roll” by Led Zeppelin.

“You betcha watecha, I love you any time. . .If you’re cold, I’ll warm you up,” sang Gordon, who at his mother’s request played the original Zeppelin song for the crowd before he stepped aside and the puppets Grandma and Grandpa were invited onto the floor.

The Birds are Dakota and members of the Sisseton-Wahpeton Tribe located east river. Their arrival discovered a large portion of the staff and students in mourning over the loss of High School Teacher Peg Henson, which could have accounted for the unusually quiet crowd. 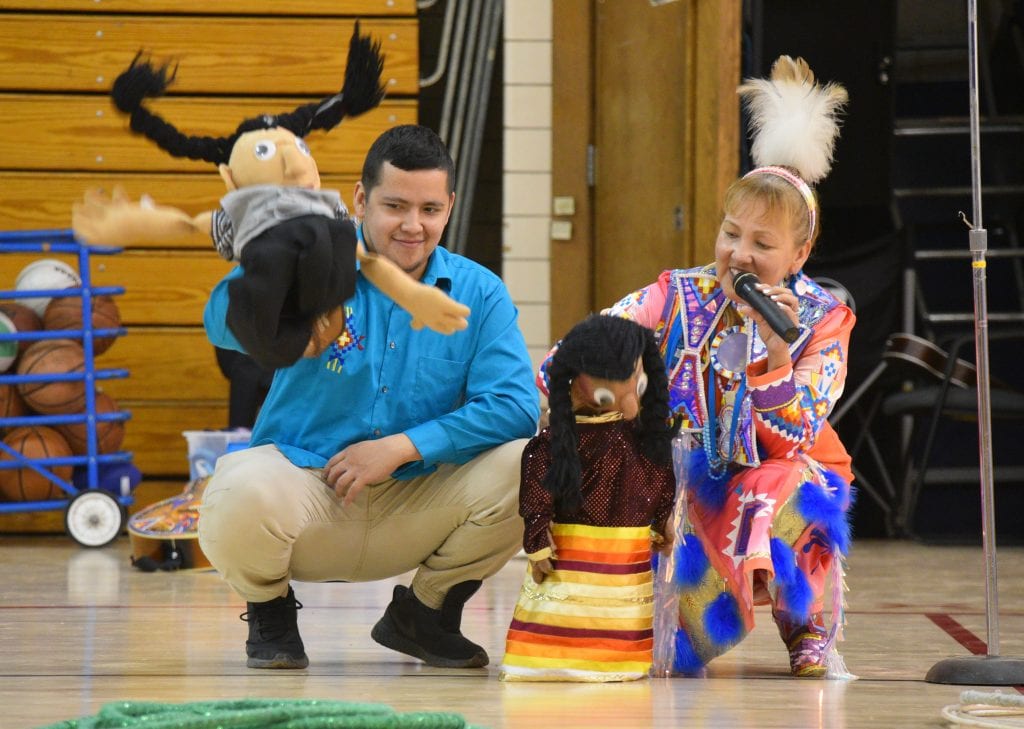 Before long, the Birds had students tapping to the beat of songs and laughing at lyrics, jokes and themselves as they shyly made their way down to accept give-away gifts which Jackie called the “give-away ceremony.”

Students were invited down who could fit certain shoe sizes, traditional shirts and skirts, and other small gifts. The students and staff members who participated stood in each of the four directions, and Jackie hoop danced with high school Junior Tallyn Garreau and another junior high student to honor all nations working for world peace.

After the hoop dance, Jackie called 10 high school students and 10 junior high students to the floor for a circle hoop passing competition.

Students had to hold hands and pass the hoop from one person to the other around the circle. The winning team earned a large star quilt and the other team won a small star quilt.

Each team gifted the quilt they won to a teacher.

The junior high won the small quilt and gifted it to History Teacher Micheal Nankervis.

The high school team won the larger quilt and gifted it to English Teacher Monica Eisenbraun, who was close friends with Family and Consumer Science Teacher Peg Henson, who passed away Sat. Oct. 12 in a car accident.

The students fought back tears as they wrapped the quilt around Eisenbraun, also a beloved teacher.

Bird closed with a “wiping of the tears” song for the students and staff members. 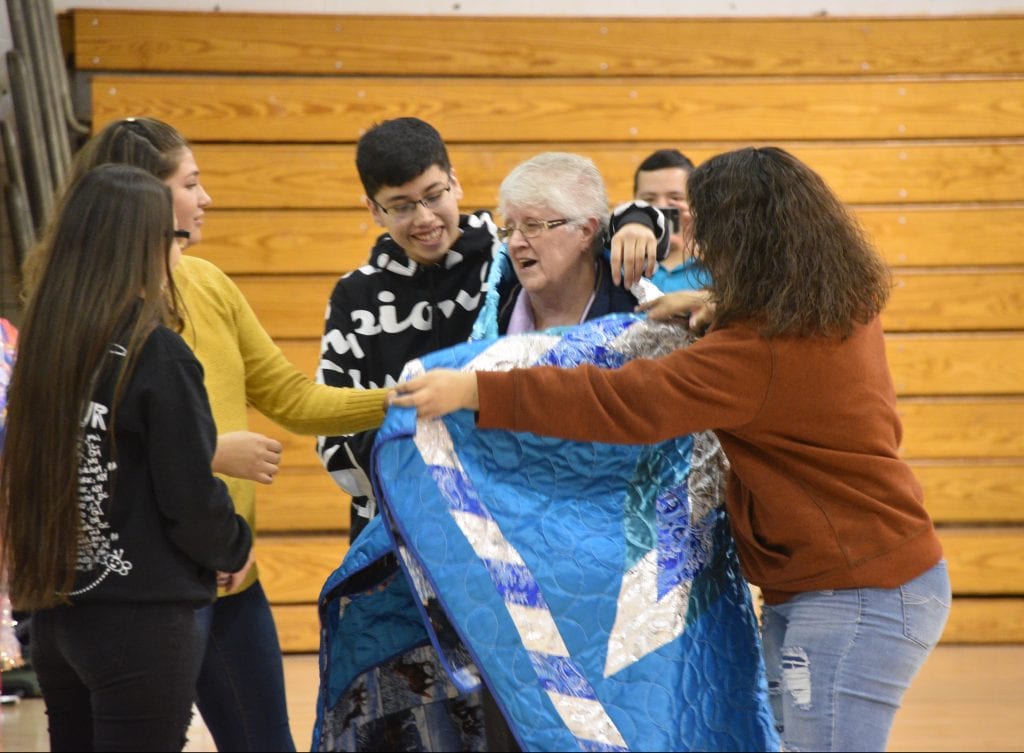 EAGLE PHOTO BY
JODY RUST
Right: Braxtyn Jewett, Brooklyn Harrison, Jade LeBeau and Logan Lawrence wrap Monica Eisenbraun in a star quilt they won in a hoop contest during the Jackie Bird assembly. The students presented the quilt to Eisenbraun in memory of Family and Consumer Science Teacher Peg Henson who passed away in a car accident on Oct. 12.