Cheyenne-Eagle Butte girls’ volleyball teams posed a challenge to the Crow Creek Chieftains Thursday night. They got off to a slow start in game one, scoring 15 points to the Chieftains’ 25 points. 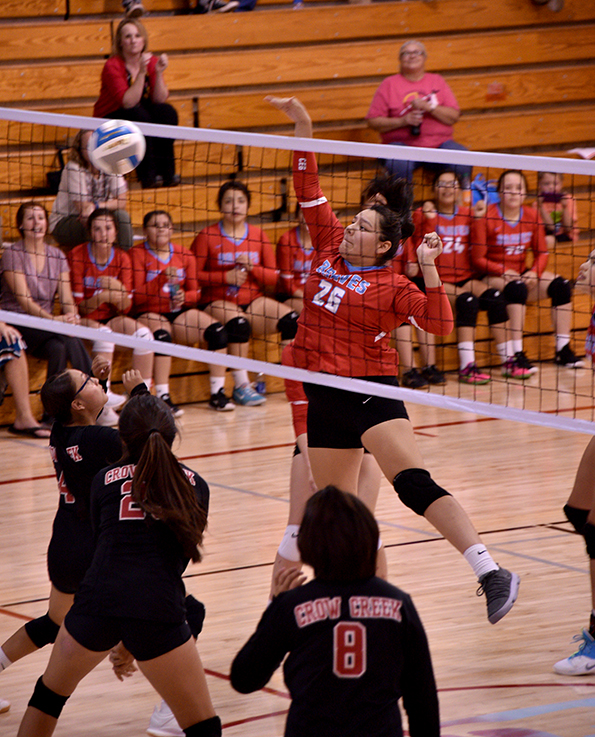 In a four-game set, the Lady Braves lost to the Chieftains, but not without an admirable fight. Junior Jay’Ellen Red Fox returned hits with either a soft touch or strong spike over the net, requiring Crow Creek to scramble for the ball.

Junior Jay’Ellen Red Fox contributed strongly on the front lines with several successful blocks and quite a few spikes across the net.

Seniors Carissa Stocklin, Miranda Vines, Sapphire Tiger, Cooper Marshall and Braxtyn Jewett shared the load of setting the ball, digging it out and sending it over the net.

The Chieftains worked just as hard as the Braves and the game was alive with both teams making impressive saves and suffering from disappointing hits or missed hits.

The junior varsity team started strong against Crow Creek with a 25-14 win in game one. The Chieftains turned up the heat in game two, struggling in front of the Braves with a 25-21 win, but the Braves exploded in game three and defeated Crow Creek by 10 in the 5-15 game winner.

The game was moved to the C-EB high school gym in a last-minute call. The players not only

faced a strong opponent, they also faced the heat of the gym, with Head Coach Mary Mitchell reminding the team members to stay hydrated.

The varsity girls have one win against Standing Rock and two losses — one to the currently undefeated Timber Lake Panthers, and one to Crow Creek, which has a 1-1 record as of Thurs., Sept. 5.

The Braves play again at home on Sept. 10 against McLaughlin.