The Lakota All-Star games took place on April 24 in the Don Barnett Arena at The Monument in Rapid City.

The best Native high school senior girls and boys basketball players from across Indian Country gathered for the second annual competition in three years. The event was cancelled in 2020 due to the pandemic. Players came from Wyoming, North Dakota, Nebraska, Kansas, Florida and South Dakota. Masks were required.

“I really believe that in our Lakota culture we have a lot of great athletes, and we don’t get a chance to see each other that much during the regular season in a normal year,” said Dale Pine Jr., Lakota All-Star game organizer and founder. “This is an opportunity to bring people together from different places, people get to see their relatives, and people get to see kids play, who they may not get to see during the year.”

The Lakota Nation Invitational was also cancelled in 2020. Pine says, “Without an event like the LNI this past season, having an event like this will give an opportunity for these seniors to play at the Civic Center one last time.”

The girls teams were Team Anpo versus Team Wacahpi. Team Wacahpi won 80-77. Caelyn Valandra-Prue from White River High School, and Class B Player of the Year, was named Player of the Game. Her achievement is especially notable an injury to her ACL and MCL in January 2020. Valandra-Prue will attend University of South Dakota on a full scholarship.

Prior to the game there was a special presentation in honor of Beau DuBray, Timber Lake class of 2020, who passed away in November 2020. A special All-Star jersey was created in honor of Beau. Jeremiah Moreno and his drum group sang an honor song at the presentation. The Moran family and Jackson Niegel sponsored the design and gift of the jersey. 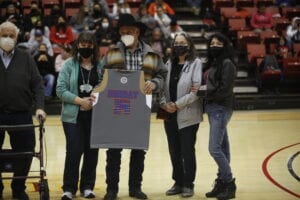 PHOTOS BY DARREL EAGLESTAFF Beau DuBray of CRST was honored before the Lakota All-Stars game on April 24 with a memorial jersey designed and commissioned by the Moran family and Jackson Neigel. DuBray passed away in November 2020. Pictured here (L-R) are his mom, Michelle Fredericks DuBray, dad Fred DuBray, aunt Lynn LeCompte, and cousin Diane DuBray. 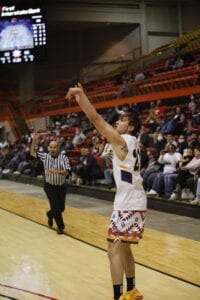 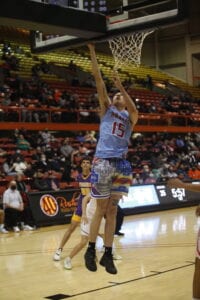 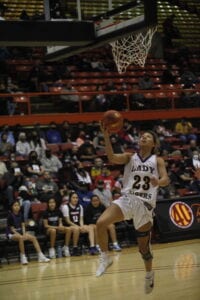