100 Years Young: Marcella LeBeau joined by family and friends near and far for celebration

Laying on the plush hide of a buffalo skin in a log cabin in Promise, SD on the Cheyenne River Reservation, a little girl dreamed of unknown futures near and far.

Did this little girl ever imagine herself shuffling across the tiles of a school cafeteria filled with people gathered to honor her life’s accomplishments after 100 years?

No, Marcella LeBeau did not imagine living as long as she has, she said after issuing me an invitation to her one hundredth birthday party in front of the yogurt refrigeration unit at Walmart in Pierre a week before the party.

In the short time we visited, four people stopped to shake LeBeau’s hand, give her a hug and kiss her cheek. She joked about her driving ability in the electric cart she guided around the aisles, and her friends and relatives teased her by putting random items in her basket and thanking her for her generosity.

A week later, amidst Halloween decorations and bouquets of rainbow-colored roses, 150 to 200 people sang happy birthday to the birthday woman as she walked into the BIE cafeteria and stood under the sign prominently displaying her image and congratulations for her 100 years of life.

Born on October 12, 1919, Wigmuke Waste Win (Pretty Rainbow Woman) wears her age with a lightness of spirit that can been seen in the mischievous gleam of her eye when she smiles.

She can turn from a joke to serious and thoughtful contemplation in time with the fancy dancer spinning across the arena.

While time and gravity have slowed her down physically, the vitality of her words and the kindness of her actions seem to keep her step light on the Earth.

Family and friends lined up to wish her well and visit with her at the table of honor. Rays of sunlight streamed into the fluorescent cafeteria, laying a soft light onto the table at which LeBeau sat.

She graciously received all the accolades of the day — Allie Moran’s presentation of an Executive Proclamation from the State of South Dakota recognizing October 12, 2019 as Wigmuke Waste Win (Pretty Rainbow Woman) Marcella LeBeau Day; Senator Thune’s representative Jesse Ewing’s presentation of a U.S. Senatorial Tribute to Marcella LeBeau to be placed in the National Congressional Record; the presentation of a quilt by former presidents and current president and vice president of the North American Indian Women’s Association (NAIWA); a song, The Rose, sung by Suzie Payne; prayer songs and prayers offered up by Lyle Cook, Dana Dupris, and Les Ducheneaux; original poems read by Eugene Ryan, “Owl River Rose” and “100 years of Life”, and words of respect and appreciation from MC and grandson Ryman LeBeau.

R. LeBeau told about how his grandmother would pull him and his siblings aside to tell them a Lakota story, or teach them Lakota words or phrases. These teachings, he said, connected him to the past and transcend through today and into the future.

The proclamations provide a snapshot of LeBeau’s contributions to the United States military service men and women during World War II as a nurse, her 31 years of service to patients as a nurse at Indian Health Services; her service to the tribe with her instrumental role in the repatriation of the ghost dance shirt from Glasgow, Scotland; and her service as a council woman from 1991-95; as well as her induction in the South Dakota Hall of Fame in 2016, and her lifetime achievement award from South Dakota State University.

More recently, LeBeau appeared in the documentary “Angels Among Us” about World War II nurses.

Her character as a Lakota woman shows through in her interviews about her experiences during and after the war. She took the opportunity to point out her experiences in boarding school before going into the military, her connection to all the people she served with while in the military and her subjugation to the harsh realities facing her when she returned home in 1945.

She explains in the documentary that she did not experience discrimination during the war, but when she returned home, she was subjected to the segragtion laws in Rapid City.

As a Native American, she was not allowed to purchase rubbing alcohol or vanilla extract, and in 1955 when the law was changed, she said it was unfortunate that the change in the law could not change the hearts of her fellow man.

When LeBeau speaks of the past, she does not represent it with disdain or nostalgic glory. She paints the truth, clad in its facts and laid bare for the children of the future to remember and learn from, not as lessons to fuel a bitter rage.

She shakes hands with a good heart and accepts people as they come, but does not shy away from giving the truth of something as she sees it or knows it.

In her 100 years, I have known her for less than 10, and sat with her as many times in talks at tables with her relatives and friends.

I am a stranger given a sneak peak into the life of a woman who has garnered respect for her accomplishments and service to others in her community and among her people.

The accomplishments can be found in numerous articles and stories told by family members and by Wigmuke Waste Win herself.

The story I tell is one of a woman who, on October 12, 2019, sat in a room filled with people who came as far as Brighton, London, New York, Arizona and Oklahoma, and as near as Eagle Butte, to wish this small, soft-spoken woman happy birthday.

Clearly, her list of accomplishments could not be if not for the nature of her heart — her dedication, determination, acceptance, honesty, and love for life all show how a person can take opportunities and circumstances (with a dollop of chance) and turn them into a life others admire and long to mirror.

As I near my half century of life, I have begun to think there are things I never should have learned about my parents or grandparents. Sometimes, it is best to know someone for who you think they are — to allow them to be on a pedestal and admire them for their virtues, never knowing their vices.

Should LeBeau have any vices, as we all do, I never want to know them, because she is a hero in my eyes, as she is for others, like eleven-year-old JonPaul Sullivan of Rapid City, who wrote a paper about her for an assignment in school.

Sullivan and LeBeau forged a friendship across age and distance, and to show her appreciation of his friendship with her, LeBeau gifted him with a Steelers quilt on Saturday.

LeBeau also gifted the people who came the farthest for her celebration, Gitti and Paul Seiger, who traveled from Brighton, England.

Gitti assisted Lebeau in the repatriation of a ghost dance shirt and has been friends with her since they met in 2009. She and her husband were given a star quilt that brought tears to Gitti’s eyes, signified only by sweep of her fingers under her eyes as she caught the few tears she could not stop from falling when LeBeau’s relatives wrapped the couple with the blanket their friend made.

As the celebration wrapped up and people began to say their goodbyes, LeBeau’s grandchildren gave away gifts to everyone in attendance. There were more gifts given than there were received by Marcella LeBeau and her family — another testament to her character and the legacy she continues to live.

EAGLE PHOTO BY JODY RUST Marcella LeBeau smiles as she is presented with an executive proclamation from the State of South Dakota, which recognized October 12, 2019 as Wigmuke Waste Win (Pretty Rainbow Woman) Marcella LeBeau Day. Alli Moran of the South Dakota Tribal Relations Office presented the proclamation during the birthday celebration at the BIE cafeteria in Eagle Butte. Marcella was joined by over 150 well-wishers and family members, some even traveling from England to celebrate her 100th birthday. 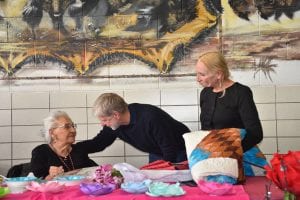 EAGLE PHOTOS BY JODY RUST Gitti and Paul Seiger, who traveled from Brighton, England to attend the birthday celebration, take a moment to thank Marcella for the starquilt that she gifted them. 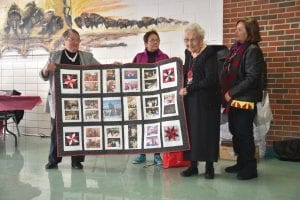 EAGLE PHOTOS BY JODY RUST The North American Indian Womens Association, of which LeBeau is a founding member, presents the gift of a quilt to Marcella for her 100th birthday. The quilt features photos of Marcella’s work with NAIWA throughout the years.